It looks like the marriage between the Raleigh drivebys and Politifact is off to a rocky start. Here’s Binky on Twitter: 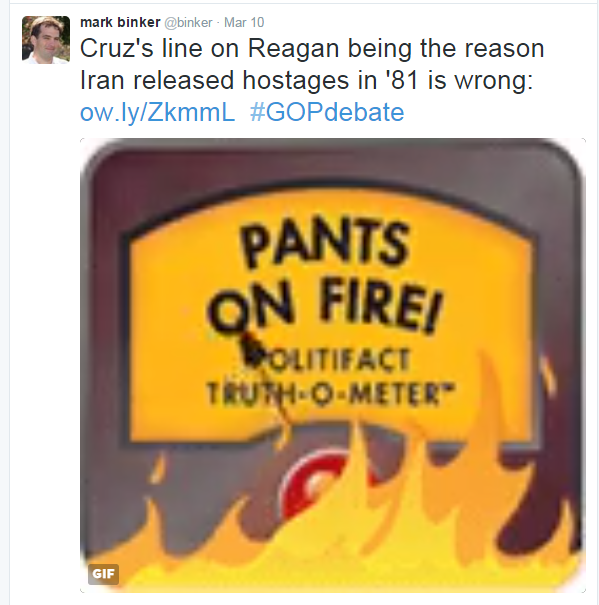 ONE of the pr

oblems here? The linked article is ALL ABOUT Marco Rubio.  Ted Cruz isn’t even mentioned.

Mr. Goodmon, you couldn’t have a better man as your, um, “fact-checker.”

Second problem: Binky AND Politifact’s assertion that the release of the American hostages from Iran had nothing to do with the election of Ronald Reagan is – at best — dubious left-wing crap.

I was living in South Korea from 1979 to 1981.  From 1979-1980, we were in the final Carter years.  North Korea was regularly making hit-and-run incursions into the South.  Once it became clear Reagan would replace Carter, they knocked it off. They apparently bought into the campaign rhetoric that Reagan would nuke first and ask questions later.  If that worked in Pyongyang, it was likely on the mind of the mullahs in Tehran.

As, um, “proof”, Politifact cites Gary Sick’s book “October Surprise” — since thoroughly debunked as far-fetched, outlandish leftist fantasy.  The book alleges that the Reagan campaign negotiated with the Iranians to delay the hostage release so that Carter would lose.   October Surprise was a conspiracy theory that originated with Lyndon LaRouche and has been thoroughly debunked by TWO congressional probes.

2 thoughts on “Binky confused by those Cubans”