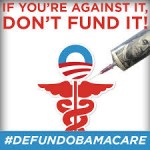 RedState’s Erick Erickson makes some rather interesting points about the latest angles being pitched by the congressional GOP in the ObamaCare debate:

Republicans are attempting two tricks to convince conservatives the GOP is still with them.

The first is the Vitter Amendment, named for Senator David Vitter, which would require Congress to adhere to Obamacare like the rest of us. I consider it a shiny object and you should not be cheering the GOP is they get it. Congress will always game the system to benefit itself. Pass the Vitter amendment and within a year you’ll see Congress have a full medical station in its basement where congressmen and their staffs can go. Likewise, the Vitter Amendment fixes something that is only temporary, if the Office of Personnel Management is to be believed.

Just wait. The Vitter Amendment will be hailed by seal clapping conservatives as a major win and, while distracted by flippers in the air, Congress will find a way around it. Aristocrats are always able to exempt themselves. If it isn’t a doctor in the basement, it’ll be a pay raise for congressmen and their staffs to offset the burden of Obamacare.

But the more pressing and important matter is the Medical Device tax. Republicans want to repeal this tax and will see doing so as a big win. Democrats, with them, call it a stupid tax. Conservatives, preternaturally disposed to support the repeal of any tax, want to support it. Heck, I want to support it.

But we should oppose it with every fiber of our being.

It is crony capitalism at its worst and, more importantly, repealing it expands the precedent of nibbling away at Obamacare to make it more palatable. Repeal the medical device tax and lose just another portion of the coalition that supports repeal of Obamacare because their issue has been taken care of.

But back to crony capitalism.

Over the past two years, Republicans in Congress have rallied toward the medical device tax as the ultimate shiny object of repeal. House leadership, in particular, has wanted to get rid of the medical device tax for a while. A few months ago, Brett Loper left the House to be American Express’s lobbyist in Washington, but he left behind a House leadership intent on this repeal.

In addition to Mr. Loper, medical device companies have poured out big money to members of Congress in dollar amounts you and I cannot.

You and I cannot get our preferred provisions of Obamacare repealed, but lobbyists can send it their own to work for Congress to get the job done and pour in lots of outside cash to influence the system. This is crony capitalism. This is Congress — Republicans in Congress — listening to K Street and doing K Street’s bidding, not Main Street’s bidding.

Separately, Republicans like Paul Ryan and Tom Coburn keep telling us that Obamacare is so bad it will collapse on its own. But they keep fixing portions of Obamacare. How the heck is it going to collapse if Congress keeps fixing it?

We may all love the repeal of taxes, but we should oppose the medical device tax repeal. It fixes part of Obamacare, thereby removing one constituency from the coalition demanding its repeal, and it further establishes how in the tank for K Street that the GOP Leadership is.

We should demand John Boehner hear us, not K Street. And on the Vitter Amendment, while you all are clapping like seals, just remember that like water flowing, Congress will always find a way around Obamacare. But your seal clapping will give them every indication they’ve done good enough to surrender.