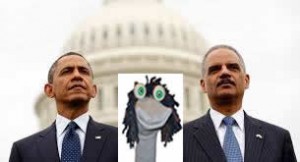 Egged on by Kay Hagan — our senior US senator who also, BTW, happens to be Chuck Schumer’s sock puppet — Barry Obama has dispatched his attorney general Eric Holder to sue North Carolina over its new law requiring photo ID to vote in the state’s elections.  New York’s senior senator apparently gave “Our Kay” permission to release the following statement:

Washington, DC – U.S. Senator Kay Hagan today applauded the Justice Department’s decision to challenge new voter access restrictions that were passed into law this year by the North Carolina General Assembly. In August, Hagan urged U.S. Attorney General Eric Holder to review the law, which has been called the most restrictive in the country. […]

Wow.  A bald-faced lie in the second sentence.  Sure, screeching leftists have made the claim, but that doesn’t make it TRUE.

“Now is not the time to be putting up barriers to the right to vote, and I applaud the Justice Department’s decision to challenge the new voter access restrictions in North Carolina that would, among other things, cut off a week of early voting and end same day registration,” said Hagan. “We shouldn’t be giving everyday North Carolinians fewer opportunities to make their voices heard while we are giving corporations more opportunities to influence elections. Restricting access to this basic right is simply not in sync with our North Carolina values, and it goes against our state’s proud tradition of eliminating barriers to participation in the democratic process.”

Never mind that several northeaastern and midwestern states have more restrictive laws than North Carolina’s law. Why let facts get in the way of incoherent leftist babbling?

Of course, Barry and Eric are making the ol’  — wait for it — RACISM !!!!  argument.   HOW is it racist or discriminatory to ask EVERYONE who shows up at a polling place for proof of their identity?  According to this video, ol’ Barry doesn’t seem to mind showing his ID at the polls.

Eric & Barry seemed to have NO problem with armed Black Panther thugs skulking around at a Philadelphia polling place.  A former Justice Department official even raised accusations that Holder dropped the charges against the Panthers because of his — Holder’s — political sympathies with their cause.

Let’s see — armed thugs dressed in black and wielding billy clubs outside a polling place is OK.  Asking voters for picture ID is NOT.   *Oh, yeah.  THAT makes sense.*

Jay DeLancy, at The Voter Integrity Project, has tossed in his two cents on Barry & Eric’s move:

“In filing his frivolous lawsuit today against our state, US Attorney General Eric Holder has hit a new low by dredging up North Carolina’s shameful racist past as a pretense to reverse the most effective election-fraud-prevention legislation our state has undertaken in more than a century.

We especially look forward to the discovery phase because the evidence and testimony gathered at that time will finally spur public outrage over how fraud-friendly our election laws have become both in North Carolina and beyond.

Earlier this month, we disclosed a NC Board of Election internal document  confirming 475 cases of voter fraud in North Carolina since 2008, but that number only represents the tip of the iceberg.

With today’s desperate legal maneuver, Eric Holder accidentally created a public forum that will show the entire world how criminal elements have been stealing votes and stealing elections in America.

When law-abiding citizens fully realize the level of voter fraud we are experiencing, the public will demand tighter controls over our entire electoral process and for that reason alone, Mr. Holder will rue the day he picked a fight with North Carolina.”

I can’t recall the last time a sitting US senator asked the US Justice Department to sue his or her own constituents.  Our lawyer — Attorney General Roy Cooper — is too busy screwing up cases in the SBI lab and preparing for his 2016 gubernatorial run to DO THE JOB HE WAS ELECTED TO DO.

Even though we already pay ONE lawyer — Cooper — to represent us in court, we’re going to have to go get another one.  How can you be fairly represented in court by a lawyer who has been running all over town saying you’re wrong / guilty?