We’ve got an awful lot of folks out there thumping their chests and exhorting their law-and-order bona fides.  Heck, even Richard Burr is out there with legislation forcing cell phone companies to provide a “back door” for the feds.

“We’ve got to let the FBI get into those terrorist phones!” And WHO can argue with that?

El Rushbo had a great take on this:

The story with Apple and the terrorists’ iPhone 5c and the FBI, the White House is weighing in on it. I think there needs to be some further explanation about what’s really going on here, folks. Because it’s become a PR battle, and it looks like Apple is gonna lose this, and it’s gonna be very tough to win because here we have a terrorist’s cell phone, and law enforcement wants in it and to find out what else might be planned, who else might be involved.

And it’s very tough to stand up for citizens’ privacy rights when the FBI and the White House say, “Hey, 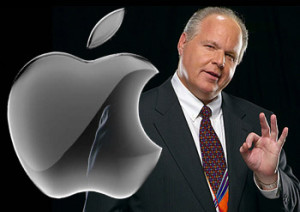 it’s just that one phone! Don’t panic here. All we want is that one phone!” But that’s not all they want. That’s not all. This is the federal government making a move on a private corporation. And this was a strategically planned — this was a specifically chosen event by the FBI. In fact, I don’t even think what’s on this phone is the real target for the FBI and the government. I think it’s just the way they’re getting in.

And just to set the table — and I’ll come back later and give you details of this. The best way that I have found to explain to people what’s going on here, is instead of this being a cell phone in possession of a dead terrorist, or a terrorist — a dead terrorist’s cell phone — think of it as a safe in the terrorist’s house. And think of it as a six-number combination safe, although the number of twists and turns really are not relevant for the discussion here.

And everybody says, “Well, fine. What’s wrong with that? The terrorists are dead. Who knows what’s in that safe? Let’s go in there and get it!”

But that’s not what they’re asking for, and I’ll detail this in a moment. What the FBI is asking for is for the manufacturer — the safe company — to give them the combinations of every safe they have made and will make. That is essentially what the government, the FBI is asking of Apple.
“Give us the key that will allow us to crack any phone.” Now, they’re not saying that, but that’s going to be the ended result if the FBI wins this. And they probably will.

Because I don’t care how big Apple is: When the full force of the government comes at you, there’s any number of ways they can get what they want, a

I mean, I hear from people all the time paranoid, scared to death that the NSA’s tracking them. The NSA’s listening to their phone calls. The NSA is activating the cameras on their phones and watching them. Particularly Millennials don’t like any of this invasion-of-privacy stuff. But all of a sudden everybody is demanding Apple give up and let the FBI into “this one phone.” It’s just curious, because when you dig into this and find out, it’s not just “this one phone,” and I don’t even think it’s this phone that’s really the ultimate, long-term target.

The FBI has been trying to get Apple to give them the code or the keys to break peer-to-peer encryption. That’s really what they want. They want to be able to decrypt your messages, your e-mails. And they need to get into your phones to be able to do that. In fact, look at… This is, I think, an interesting way to look at this. Look at how differently a publicly traded company views the security of its customers compared to Barack Obama and Hillary Clinton and agents of the federal government.

Look at how they protect, try to guarantee the safety and security of the citizens.

Wouldn’t it be nice if Obama and Hillary were doing everything they could to protect the American people from all of these threats from an open border, from Mexico, from ISIS? All of these migrants, all of these refugees, you think that’s not a security breach? You think those are not security breaches waiting to happen? Can you believe Apple is doing and appears to care much more about the privacy and security of their customers than the United States government seems to care about the privacy, security, and what have you, of American citizens?

Look how Hillary treated America’s secrets on her off-the-grid e-mail server. Look at all the top secret data she was trafficking in, all the top secret documents, e-mails, and so forth. Her e-mail server wasn’t secure. And it wasn’t just hers, was it? “Hey, we just want in on this one phone,” says Josh Earnest. “We just want in that one phone. We don’t want any others.” Yeah, it was just one Hillary e-mail server. Well, who else was she dealing with? Who else was able to traffic in these documents that Hillary was trafficking in?

Show of hands.  Who can remember the last time the federal government only took an inch when they COULD have had a mile?