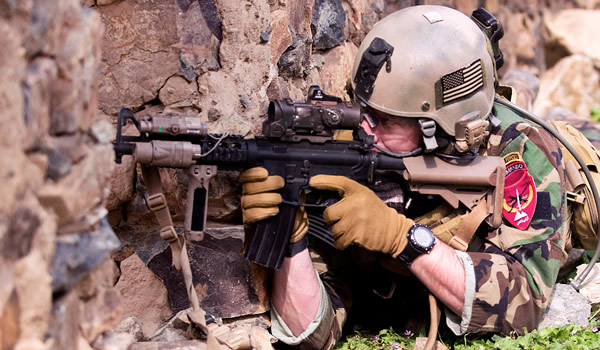 Former federal prosecutor Andrew McCarthy — the guy who put the ‘Blind Sheik’, the mastermind of the first World Trade Center Attack, behind bars — has an excellent piece in National Review about how micromanagement from DC is wasting a lot of American lives and ruining a lot of the good work that got started a decade ago:

We have met the enemy and we are they. That is certainly the message the Obama administration has conveyed to the United States Marine Corps in Afghanistan this week.

Our troops have been the target of serial sneak attacks by the Afghans with whom they are forced to “partner.” Nevertheless, our Marines were ordered to disarm before being admitted into the presence of Obama’s defense secretary, Leon Panetta. Yes, you read that correctly: Our Marines were stripped of their arms.

Panetta was at Camp Leatherneck on a “surprise” visit, hoping to calm the disastrous situation in the combat theater. Turns out not to have been much of a surprise: One of our Afghan “partners” — a contract interpreter hired to help our armed forces in deadly Helmand province — seamlessly converted to Islamist suicide assassin. His contacts clued him in on the surprise, so much so that he managed to speed a stolen truck toward the runway, just as Panetta’s hush-hush flight was about to land. He just missed smashing the contingent of Marines waiting to receive the secretary — that is to say, to whisk the secretary away to safer quarters, if there is any longer such a thing in this hell-hole, where 90,000 American troops are now stationed, compared with the 5,200 who conclusively routed al-Qaeda a decade ago, which you may recall as the mission they were sent to accomplish.

“We don’t know what his intent was,” the American commander, Army Lieutenant General Curtis M. Scaparrotti, said of the assassin. No, of course not. After all, we wouldn’t want to speculate that perhaps our cherished partnership with the Afghans is an abject failure — over 99 percent of the population being Muslim, steeped in the Wahhabist tradition that inculcates abhorrence of infidel occupiers.

The situation might be called a “powder keg,” except that is what one says in anticipation of a future explosion. In Afghanistan, the explosions are already happening, their pace and ferocity on the rise. Afghans went on a murderous rampage after some Korans were accidentally burned, Korans that jihadists had used to incite each other by adding handwritten messages reaffirming hatred of Americans. Among nearly three dozen killed when the mayhem began were two American soldiers, murdered by a treacherous Afghan “soldier” they were training.

Soon after, two more U.S. officers were shot in the back of the head by Afghan “security” personnel at the interior ministry in Kabul. A few days later, two more American soldiers were killed by Afghan “soldiers” at a base in Kandahar. In fact, our “partners” have turned their guns on scores of our troops in the last five years, killing 70, wounding many more. Those are just the U.S. casualty figures. British forces and other NATO personnel are also being assassinated with regularity.

Still, our forces are expected to trust these faithless partners. Trust them and, at the premeditated cost of American lives, protect Afghan civilians — tribal Islamists rife with Taliban and other terrorist sympathizers. There is a reason al-Qaeda was so comfortable in Afghanistan: It is nigh impossible to know who is a civilian. The Taliban, the Haqqani terror network, and assorted other jihadists do not wear uniforms — the better to blend into the population after doing their bloody business. Yet our troops operate under stifling rules of engagement that quite intentionally prioritize the prevention of civilian casualties over force protection. When under attack, they are denied adequate air cover out of concern, again, about the possibility of harming Afghans.

Last weekend, an unidentified U.S. Army staff sergeant snapped. He is said to have massacred 16 civilians in a small village. In this decade-long war, the burden of which has been borne exclusively by a few hundred thousand military families while the rest of the nation yawns, the staff sergeant was in his fourth combat tour.

The first three were in Iraq, a nation whose Muslim population similarly despises its American liberators, a nation where we left behind no trace of America’s eight-year sacrifice. We were sold a “freedom agenda” bill of goods about creating a stable democracy that would be a reliable American counterterrorism ally. What we actually purchased, at a cost of over 4,000 lives, over 30,000 wounded, and over $700 billion, is a sharia state beholden to Iran. The new Iraq calls for Arab solidarity against Israel amid pro-Hamas demonstrations. Its specialty is the persecution of Christians andhomosexuals. It even features a Saudi-style “Moral Police,” sharia shock troops whose latest specialty is the stoning of teenagers for the crime of wearing their hair in the “emo” style.  Beyond a gaudy, $750 million palace of an embassy that, at 104 acres (bigger than Vatican City), will be too vast for our skeletal security force to protect, Iraq will have no American imprint. But it left its mark on the staff sergeant, a highly decorated combat veteran. During tour number three in 2010 — i.e., seven years after our principal objective of deposing Saddam Hussein was achieved — he lost part of one foot in an explosion and suffered a traumatic brain injury when his vehicle flipped over.

No matter. Islamic democracy-building’s forward march of freedom waits for no man: The staff sergeant was patched up and sent off to Afghanistan for tour number four. Now he has gone on a shooting spree. Hamid Karzai, who owes not just his presidency but his continued existence on this planet to the unwavering dedication of America’s armed forces, was barely finished demanding sharia justice for the Koran burners when he started screaming for the staff sergeant to be tried in Afghan court. (The Army has moved him out of the country, and he will eventually face a U.S. court-martial.)

This was the chaos into which Secretary Panetta descended. After dodging the assassination attempt, he was to address American forces and their Afghan trainees in a tent where the only security would be the United States Marines. Yet the Marines were ordered to disarm before entering. From on high came the directive: They were to check their automatic rifles and pistols outside the tent. Only then would Panetta appear.

It is hard to decide which explanation for this is more infuriating. There is the one the Marines were given: Since it would have been insane to allow Afghan soldiers, whose treachery is notorious, to be armed, the always faithful Marines had to be disarmed in order to show that our government considers them no better than their Afghan “partners.” The Marines would know this rationale is fraudulent: It is entirely ordinary for them to remain armed, and for Afghans not to be armed in the first place, during a visit from the secretary of defense to a combat theater.

Hence the explanation the Marines were tacitly left to ponder: As shameful Afghan officials castigated the American troops on whom they depend, and the Taliban hurled charges of “genocide,” American commanders — taking their cues from the apologizer-in-chief — disarmed the Marines to show that we take such bloviating seriously.

While Panetta addressed our defrocked troops, the savages were up to their usual grisly business. Tim Lynch, a retired Marine now embedded in Afghanistan, summed it up well in an e-mail to journalist Michael Yon: “The Taliban killed 13 women and children today with an IED in Uruzgan and I think they got 8 yesterday — but that’s all cool here because they’re the Taliban and we’re the big, fat, retarded kid on the block who gets bullied everyday but still shows up to fork over even more lunch money while assuming at some point everyone will like us because we’re so [deleted] generous.”Toward what end are we putting our best young people through this agony? On Capitol Hill, hawks such as Representative Buck McKeon (R., Calif.) insist that we need to see the war through because “the reason we liberated Afghanistan in 2001 was right then, and it is the same reason we fight today to keep it liberated.”

Ridiculous. We did not send our troops to liberate Afghanistan. We sent them to rout al-Qaeda, which they did with spectacular speed and effectiveness. There is nothing in the Authorization for the Use of Military Force (AUMF) about liberating anyone. The American people would never have supported such a thankless, implausible mission.

In point of fact, President Bush was fully prepared to leave the Taliban in place as the Afghan regime if they had agreed to his demand that they surrender bin Laden and his confederates. The Taliban was toppled not because they were tyrannizing their people, but because they spurned us. There was no fervor in post-9/11 America to build a new Afghanistan. In the main, the Afghans are Muslims in the thrall of Wahhabism, the fundamentalist Islam of Saudi Arabia. As such, they cannot be liberated — they have chosen their own tyranny.

In the meantime, not only have Mr. McKeon and his colleagues failed, in the eleven ensuing years, to specify the Taliban in the AUMF as the enemy of the United States, but we can’t even get the State Department to designate them as a terrorist organization (although, in 2002, President Bush amended the relevant executive order, No. 13224, to label them a global terrorist organization). Three years ago, the then–theater commander, General Stanley McChrystal, asserted that Afghanistan is not our war: “This is their war. . . . This conflict and country are [theirs] to win — not mine.” Now, the Obama administration has no stomach to fight them; as the Taliban mock us and threaten to behead our troops, the president applauds their new diplomatic mission in Qatar. Obama is pleading with them to negotiate — reportedly even offering to release Taliban war criminals detained at Gitmo if that is what it takes to get a deal.

The only reason for our troops to be in a barbaric country is to vanquish the barbarians. Obviously, we are not trying to do that in Afghanistan; we are biding time, putting our young men and women at grave risk, so that Obama can manage a withdrawal, so the non-war against our non-enemy looks like a non-surrender.

In Yemen, where there are no U.S. troops on the ground, Bill Roggio of the Long War Journal reports that our government killed dozens of al-Qaeda operatives by air strikes in just the last week. In Pakistan, where there are no U.S. troops on the ground, the Obama administration has stepped up the Bush-era pace of drone attacks, killing numerous jihadists. The name of the game with terrorists is to deny them safe haven to train and plot. As retired general Paul Vallely has been arguing for years, our troops have so damaged al-Qaeda at this point that, without committing massive ground forces in hostile Islamic countries, we can strike the enemy from “Lily Pads” — established land or seaborne bases in safe areas.

Our troops should be out of Afghanistan. Yesterday.