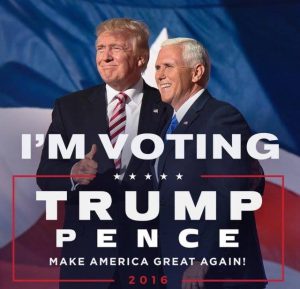 Seriously.  The other side is hauling barely-alive people out of convalescent homes to vote.  They’ve got judges putting dead people BACK ON TO voter lists.  They’ve got Loretta Lynch’s goons down here looking for Rotarians threatening poor black old ladies. College kids, of dubious residency and intelligence, are flooding out of the dorms to cast votes in North Carolina races.  A lot of folks who no habla ingles and still have dust on their clothes from the other side of the Rio Grande are being registered.

Sensible, right-minded North Carolinians worried about the future of our state need to take an hour or so out of their day today and VOTE. Take any and all of your like-minded family and friends to the polls with you. (Leave your college-aged kid majoring in women’s studies AT HOME.)

Don’t watch cable news today.  There will be a lot of Psy-Ops going on to dispirit you and make you think it is already over.  It’s FAR from over.

The leftist machine is so concerned about losing control of the bureaucracy and so many American lives.  They’re throwing everything but the kitchen sink into this election.  We can’t let them steal this away from us.

Are you seriously going to vote against someone for president who said some bad words along the way toward building a multi-billion dollar personal empire? Are you seriously going to vote FOR a woman whose resumé is totally based on who she’s been married to?  A woman who has not created a job, who has never built a business, who HAS wrecked economies and societies, and made bad decisions that led to bloodshed for innocents?

If you haven’t yet voted, go do it.  It’s important.