We’re approaching September 2014.  Way back in January 2013, the North Carolina state board of elections announced an investigation

into the campaign finances of state senator Fletcher Hartsell (RINO-Cabarrus).  THIS news report from January 2013 cited info from the state board of elections suggesting that the  “process could take a couple of weeks.”

Well, here we are 18 months later and there has been no resolution to the Hartsell matter.  Contrast that with the investigation of state Rep. Michael Wray, the state House’s deputy Democrat leader, for very similar allegations.  The board asked Wray for some campaign finance clarifications, and he responded in mid-December  2013.  In mid-July 2014, news broke that Wray was under investigation by the state board of elections.  It appears that the Republican-dominated board is moving much faster on the probe of the Democrat legislator than they are on that of the Republican senator who just so happens to be a prolific fundraiser for the NCGOP and a close political ally of Governor Pat McCrory and state House speaker / US Senate nominee Thom Tillis.

State elections board spokesman Josh Lawson recently started following us on Twitter.  So, we decided to make use of that forum to ask him when there might be some movement on the Hartsell probe: 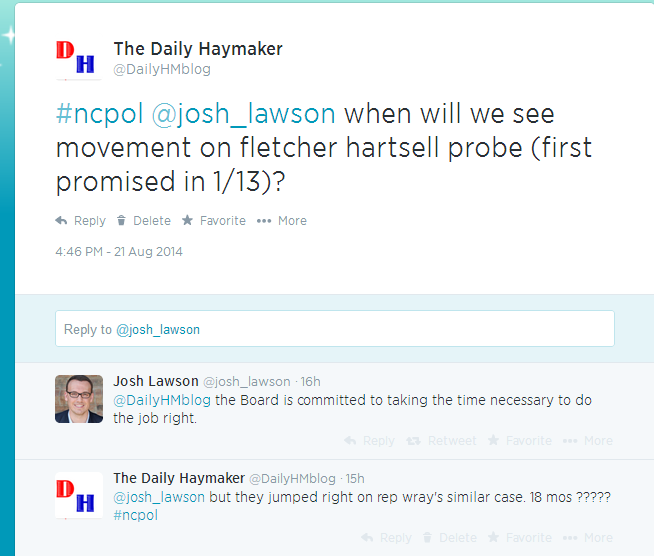