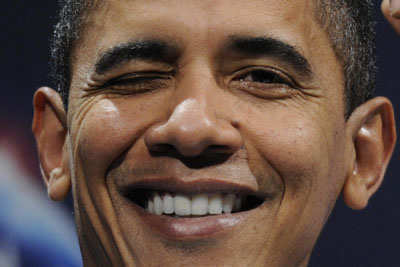 BarryO and his sycophant accomplices in the alleged mainstream media keep telling us about “job creation.”   People who actually know something about business and the economy will tell you THAT optimism is pure misguided nonsense:

U.S. employers added workers to their payrolls last month, easing recession fears but falling well short of the pace needed to get 14 million jobless Americans working in the next few years.

The government’s snapshot of hiring showed employers added 103,000 jobs in September. The Labor Department also revised up the number of jobs added in August to 57,000 from its previous estimate of zero.

Although the U.S. economy added more jobs than expected last month, that the outlook remains murky. However, Mesirow financial economist Adolfo Laurenti says that the jobs uptick reduces the risk of a double-dip recession.

The August stall in the labor market had fanned fears that the economy was falling into recession, but Friday’s numbers suggest instead an economy stumbling forward. According to most estimates, employers need to add 125,000 jobs a month just to keep up with population growth; they need to add at least 200,000 to make a dent in the unemployment rate, which stayed at 9.1% for the third consecutive month.

“This report drags you away from the ledge a bit, but once the dust settles you’re still left with an utterly anemic growth backdrop,” said Tom Porcelli, chief U.S. economist for RBC Capital Markets.

The report was the latest sign of an economy struggling to gain momentum. Consumer spending is barely keeping up with inflation. The manufacturing sector, once a bright spot, has seen growth stall. And companies are thinking twice before hiring.

In a post on the White House blog, Katharine Abraham, a member of the president’s Council of Economic Advisers, called the unemployment rate “unacceptably high” and said the report “underscores the president’s call for Congress” to pass his jobs bill.

John McCarty, president of LUX Dynamics, said he needs both sales staff and assembly-line workers for his Reno, Nev., company, which makes energy-efficient light fixtures. But rather than hire now, he is waiting until next year in hopes the economy will stabilize.

“I keep saying the same thing: Let’s see what next month looks like,” he said.

Business fell off early in the summer, Mr. McCarty said, and he came close to layoffs. It has come back somewhat, but he remains cautious, in part because many of his construction-industry clients are taking a wait-and-see approach.

“Now the orders are picking back up and things are looking good, but what I’m really wondering is: Is this month unique?” Mr. McCarty said. “I want to see some sign of a trend.”

By any measure, the U.S. jobs picture remains bleak. Beyond the 14 million Americans currently unemployed, millions more are stuck in part-time jobs or have given up looking for work. The rate of labor underutilization—a broader measure than the official unemployment rate that includes people who are working part-time because they can’t find full-time work—hit 16.5% in September, up from 16.2% in August.

The number of long-term unemployed continued to climb. More than 6.2 million Americans—nearly 45% of all unemployed workers—have been seeking jobs for more than six months.

When Bob Greeney lost his job as a sportswriter at a Connecticut newspaper in early 2009, he expected to be out of work for just a few months. More than two years later, he is still looking. His unemployment benefits ran out in July, and he has been paying the rent by raiding his 401(k) savings and working stints holding line markers at high school football games.

With few openings at newspapers, Mr. Greeney, 53, said he looked in other areas that would tap his writing skills, such as public relations. But with so many people competing for so few jobs, Mr. Greeney said, employers say they don’t want to hire anyone without directly relevant experience.

Mr. Greeney said he tries to stay optimistic, but sees frustration mounting among the long-term unemployed. “I can’t believe there’s no one out there that can use what we bring to the table,” he said.

Private employers added 137,000 jobs in September, with the biggest increases in health care and technology. The total reflects the return of 45,000 Verizon Communications Inc. workers who were on strike in August and counted as unemployed for that month.