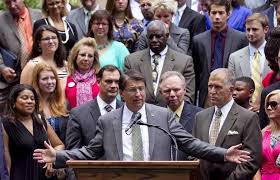 House Speaker Thom Tillis and Gov. Pat McCrory had a big media event yesterday.  They were touting the idea of separating education from the rest of the budget and passing the education part FIRST.  They invited Democrat state superintendent of public instruction June Atkinson to their press conference, and she seemed to be on board with it all. But this deal has to pass the legislature.  And last time we checked — Miss June has NO VOTE on the floor of either chamber on Jones Street.  The most glaring absence from Wednesday’s media event was that of state senate president pro tem Phil Berger — who has a HUGE say in what happens in one of Jones Street’s two chambers.  According to media reports, Berger and his leadership team were not consulted on the McCrory-Tillis proposal, and were not invited to the press conference.

What is the back story on all this?  Well, it appears McCrory and Tillis were calling the Senate’s bluff.  The Senate KNOWS that Tillis really really really needs to adjourn so he can hit the US Senate fundraising trail.  The upper chamber has serious differences with Tillis’ crew over the budget.  So, Senate leaders have taken comfort in knowing they can sit back and wait out Tillis — until he comes running back over to their side of the debate.  An agreement can then be reached, and Thom can get back to trolling for cash.

McCrory and Tillis appear to be countering by going public with an offer that (1) makes Tillis look proactive and (2) forces the Senate to come off their waiting game and take action.

From a political standpoint, how much sense — over the long run — does this strategy make?  We say NOT MUCH.  Speaker Thom is officially out of powe

r in a matter of days or weeks. Insiders tell me that Tillis is one of the biggest reasons that McCrory gets ANYTHING out of the General Assembly.  Once Tillis has moved on — to DC or back to Huntersville — Phil Berger is officially the BMOC.  The Rockingham County Republican will be the 800-lbs gorilla staring down Gov. Pat for at least the next two years.  How smart is it to walk up to an 800 lbs gorilla and slap his face?

Any kind of deal on the budget will have to pass both chambers on Jones Street.  It will need Mr. Berger’s blessing to see the light of day in the upper chamber. Why do an end-run around him?

It may be a noble idea for Gov. Pat to try and help his friend’s Senate bid.  But it doesn’t seem all that smart to isolate someone you will NEED for ANY KIND of legislative success over the next two years.  These kind of tactics may have worked wonders in waging combat with the Charlotte City Council.  But Jones Street is a whole new world from that one.  What worked for you in playing for The Durham Bulls won’t always work so well for you when you move up to The Tampa Bay Rays.