McClatchy-Raleigh published a cutesy little item today about how Thom Tillis is not going to shave until the doggone legislative session ends.  (Seriously.) :

WHAT’S NEXT? BEARDED LADIES? Speaker Thom Tillis announced Sunday that he had stopped shaving and didn’t intend to start again until the session was over. The “Beard Caucus” apparently met on Sunday (surely just a break from the hard task of finalizing the state budget) and came up with the ground rules: “Neck trims, face trims, etc. are allowed but a beard is required to be compliant. Goatees, mustaches and big sideburns will not be considered compliant.” The Speaker did not indicate if the beard caucus was bipartisan or how the women of the House felt about the fun and games.

Hmmm.  It’s just like the new castrati girlie-men at McClatchy to toss “sexism” into the mix here.  (Is female facial hair par for the course in the ever-shrinking McClatchy newsroom? Enquiring minds want to know.)

If  Thom Tillis grows a beard — how will anyone tell him apart from Phil Berger?  (Poor Martin Nesbitt.  I can just see his head spinning now.)

El Rushbo came up with “The Limbaugh Theorem” to explain Big Barry’s strategy of campaigning against “those folks in Washington” like he hasn’t been part of it for the last SEVEN YEARS (elected to the Senate in 2006).

Tholl Road Thom practiced a little of what Barry has been preaching in a recent Facebook post: 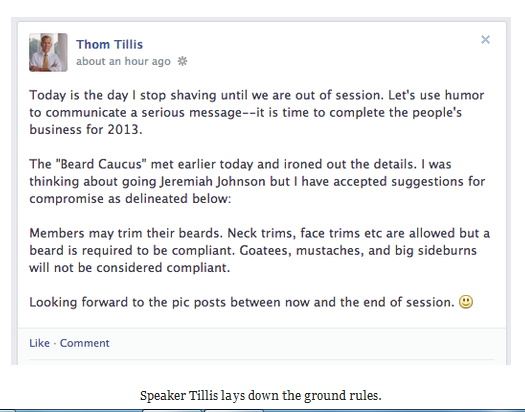 Time to complete the people’s business????   This sounds like a police officer saying something like “Gosh, I wish someone would do something about all of these rapists, robbers, drug dealers and murderers.”

Who’s in charge here, “Senator”?  You set the calendar.  You make the call on what gets to the floor, when it gets to the floor, and what goes away.  According to the legislature’s web site, there is “no statutory nor constitutional requirement” for when the session must end.   It would appear that ol’ Thom has a big say in when this thing shuts down.

There are still plenty of important things to get done.  Mr. Tholl Road needs to show a little leadership to get that stuff knocked out in a timely manner.  Most of us would rather see him step up and take responsibility than to partake in silly PR gimmicks.

4 thoughts on “Tillis inspired by Obama to practice The Limbaugh Theorem?”