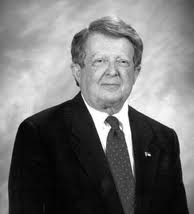 As we approach this Thanksgiving holiday, please keep former North Carolina governor Jim Holshouser (1973-1977) and his family in your thoughts and prayers.  The governor went under the surgeon’s knife this week, and is resting and recovering at an undisclosed — by me — medical facility here in the Tarheel State.

Gov. Holshouser has been an acquaintance of mine for about ten years now. He is a true Southern gentleman and a class act.

As students of our state’s political history know, Holshouser set two records with his stunning gubernatorial victory in 1972: (1) becoming the youngest governor in the state’s history, and (2) becoming the state’s first GOP governor since Reconstruction.  He came to power in a good year for the GOP, which  saw Richard Nixon stomp George McGovern and a guy named Jesse Helms enter the U.S. Senate.

I’ve disagreed with the governor on some issues,  but I have always respected him as a man of principle.  If he tells you something, you can take it to the bank.  That is such a rare trait in politics today.