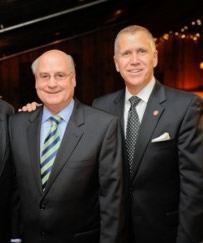 Thom Tillis and Harold Brubaker have quite a special political bond. They are the only two Republican speakers of the North Carolina House since Reconstruction.  The two became very close upon Tillis joining the House in 2006.  On the eve of Brubaker’s 2012 departure from the House to take up lobbying, Tillis publicly described Brubaker as “my mentor, a trusted colleague, and a dear friend.”

It’s 2014 and Harold Brubaker is going gangbusters in his lobbying business.  What’s intriguing is how much influence he appears to still have in the speaker’s office TWO YEARS after leaving office.

Last week, Tillis appeared at a press conference calling on the federal government to give home health care companies a break.  Harold Brubaker has been affiliated with a DC-based lobbying firm that represents a slew of home health interests.

In September of last year, the state House — under Tillis’ leadership — led the way in overriding Gov. Pat McCrory’s veto of immigration legislation:

The N.C. House on Tuesday overrode Gov. Pat McCrory’s first vetoes on two bills – one that would require drug testing for some welfare applicants and another that would “broaden an exemption for employers to avoid using the E-Verify system to check the immigration status of new workers,” according to The Associated Press.

The debate in the N.C. House lasted less than 40 minutes and the end votes were 77-39 on the drug testing bill and 84-32 on the immigration related bills.

This morning, the measures moved to the N.C. Senate and faced a similar fate with three-fifths of the N.C. Senate also voting to veto both bills, according to the Charlotte Observer, which in a separate piece noted that Gov. McCrory fought the overriding vetoes to the very end.

Following Wednesday’s Senate vote, McCrory issued a release praising much of the legislation that passed this year but also noted the “flawed legislation” of the two aforementioned bills.

“House bill 786 triples the E-Verify seasonal worker exemption from 90 days to nearly nine months and has created a loophole that could cost legal North Carolinians jobs. This measure changes the law’s focus from exempting ‘temporary seasonal employees’ to help the state’s farming industry to exempting a category of employees for any industry, regardless of the season or the needs. Thus, I will direct the executive branch to explore all legal and executive authority to ensure the letter and spirit of our nation’s immigration law is followed in this state,” McCrory’s prepared statement went.[…]

An exemption for employees for any industry regardless of the season or the need.  Why?  Some viewed this as a favor for Big Agriculture.  But let’s look a little deeper than that.

According to the NC Secretary of State, Harold Brubaker is a registered lobbyist for The Center for International Education in Chapel Hill.  What is that?  Let’s turn to their web site:

Since its founding, VIF has sponsored more than 10,000 highly qualified educators from more than 70 nations in classrooms throughout 10 states.

Hmmm.  Tillis leads the fight to push through legislation that provides exemptions from E-verify for foreign seasonal workers in any industry in any season.  Teaching is an industry. It certainly is seasonal. Harold Brubaker, Tillis’ “mentor”, is a paid lobbyist for this group that brings foreigners into North Carolina to teach in our schools.

It was disgusting to watch our legislators weaken state legislation regarding immigration.  If it was done merely as a favor to Thom Tillis’ mentor-turned-lobbyist, that makes it doubly disgusting.

4 thoughts on “Thom & Bru: Mutual back-scratching at its best”