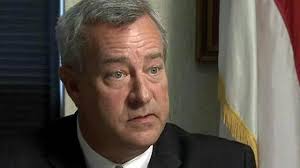 A reader forwarded to us an email conversation they had with NCGOP chairman Claude Pope.  (Of course, we came up.) The reader asked THE Pope about reports on our site that the NRSC had entered into a joint fundraising arrangement with Thom Tillis — one of a crowd of GOP candidates seeking the honor of sending Kay Hagan packing.  The reader asked if the NCGOP had cautioned its operatives against taking sides in the upcoming Senate primary.  (I can see the cause for concern — given the stories about Thom Tillis and Wayne King.)

Here’s what THE Pope had to say:

The NRSC is a separate organization from the RNC.  Their membership is made up of Republican U.S. Senators, and they raise their own money and take no direction from the RNC.  Go to www.nrsc.org and click “about”.  To answer your question, the last time I spoke with a representative of the NRSC was back in August when they came to Raleigh.  We helped facilitate meetings with Brannon, Harris, Tillis, and Berger (who, at the time, was still considering entering the race).  They may have met with some others as well, but we were not involved in those meetings.  The NRSC has not reached out to me since then.
The NCGOP is steadfastly neutral in the US Senate Primary, and any speculation or attempts to tie our leadership to any endorsement of a specific candidate is simply nonsense – and merely an attempt by those supporters of certain candidates to continue to try and split our party for their own gain.  I’ve said from day one that the NCGOP will work tirelessly to defeat Kay Hagan in November and will embrace whomever emerges from our primary in May.  You’re smart enough to recognize blog posts like these for what they are – agenda driven and biased reporting designed to alienate and divide, rather than to unite and win.
Cheers,
Claude

Biased? Well, yeah.  Our masthead says we provide “Carolina-flavored common sense conservative commentary.”  In other words, we tend to promote the kind of limited government positions you find in the oft-ignored state and national GOP platforms.  One would think a Republican Party chairman would appreciate our kind of, um, “bias.”
By the way, our report on the NRSC and Tillis was based on Bloomberg News reporting as well as filings with the Federal Election Commission.  We also pointed out how we were personally promised neutrality by an NRSC rep prior to that report coming out.  The Tillis campaign — in their public statements — appears to be proud of their support from the DC GOP establishment.
Our “agenda” here is also pretty clear — (1) throw some sunlight on the operations of government and elected officials, (2) cheerlead for limited government, and (3) expose BS spewed by lying politicians and regurgitated by lazy stenographers in the mainstream media.  Campaign on the principles of limited government, act on those campaign promises once you are in office, conduct yourself in an ethical, lawful manner, and we will have little to no problem with you.  Nor YOU with US.
The reader responded to THE Pope’s email:

Thank you for the clarification, I am glad for the reassurance that the NCGOP leadership remains neutral during the primary period. Was it made clear to the NCGOP at the time when the meetings were facilitated that the intention of the NRSC in meeting with candidates was to direct funds / support to one particular candidate during the primary period?

[T]he subject never came up.
By the way, I would feel much better about our chances next November if I heard – and felt the same level of commitment from supporters of Brannon, Harris, Tillis, Flynn and Grant to support our primary winner.You can be assured that between now and May, I will ask every audience, every candidate’s supporter and every candidate for their public declaration of such support, and I expect it.  Not only do I expect it, I expect a passionate and enthusiastic declaration.  Anything short of an enthusiastic endorsement of our winner  – prior to the primary’s results being known – will be a sure sign of defeat in November, and I might as well head on back to the beach now – the effort is not worth my time.  Are you prepared to make the same commitment as me?

Okay, where do I begin?  First, it’s the establishment crowd — not the grassroots — who have a problem with party loyalty and supporting the nominee.  An awful lot of us held our noses and voted for Pat McCrory, Mitt Romney and John McCain.  But let’s look back at the 2012 race for the open NC House 6 seat.  Republican Bill Cook had knocked off Democrat incumbent — and Marc Basnight lieutenant — Arthur Williams in 2010.  The district got gerrymandered, and Cook decided to run for the Senate.  How does the Raleigh establishment respond?  They get the Dem they paid to defeat in 2010 to switch parties and run as a Republican in 2012.  They funded him and promoted him over Tea Partier Mattie Lawson.  Lawson won a close, hard fought primary.  In November, Democrat Paul Tine slipped by Lawson in the right-leaning district.  Clearly, a lot of folks who backed Williams pouted and stayed home.
Clearly — in that case, at least — increasing the headcount of Rs is more important to the powers in Raleigh than a conservative agenda or platform.
Blogger and political analyst Jeff Taylor did an analysis of the 2008 governor’s race showing how Pat McCrory won many Mecklenburg County precincts that also went for Barack Obama and Kay Hagan.  In 2012, it was pretty clear that the establishment — including the McCrory campaign — did little to nothing to help the mostly Tea Party-aligned Republican Council of State slate.  Final vote numbers from that year indicate a heck of a lot of people marked McCrory’s name and then crossed over to vote Democrat for lieutenant governor on down.
A primary is all about debating the future direction of the party.  Stifling dissent and discussion from the top down  is fascistic and totalitarian to the hilt.  It is up to the individual campaigns to win over the votes of other candidates’ supporters.  Earn my support.

10 thoughts on “THE Pope: It’s ALL The Haymaker’s fault!”