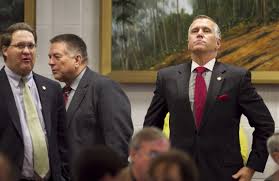 I’m in the Raleigh media market.  We’ve just now started seeing Thom Tillis’ TV ad that the mainstream media has been cooing about for weeks.  In the ad, the speaker — and US Senate candidate — talks about the private sector and what happens there, as opposed to the mean ol’ public sector (like you find on Jones Street and other parts of Raleigh).

Businessman.  Conservative.  Those are the two labels the ad attaches to Tillis.  Never mind that Speaker Thom hasn’t worked in the private sector since 2009.

One of the key points we’ve been hearing from Tillis backers is that his success as a leader in the NC House makes him a PERFECT choice for US senator.  Why not mention his tenure on Jones Street in the ad?  Why not talk about that record of success?

The Tillis campaign should speak up about his time on Jones Street.  Because you KNOW Kay Hagan and the Democrats surely will.

2 thoughts on “ThomTV: What? No mention of the NCGA success story?”