In Washington, we have REPUBLICANS seriously considering raising the federal gas tax.  In Raleigh, we’ve had Republicans actually push a  gas tax hike through the state Senate.  One of the brightest minds in finance, Steve Forbes, pokes all kinds of holes in the arguments of these tax-hikers in a recent issue of his name-sake magazine:

IF YOU WANT TO KNOW what fuels Americans’ ire with our political class, just look at the hot new idea percolating in Washington and state capitals: Raise taxes on gasoline! Thanks to a stronger dollar and burgeoning oil inventories, gas prices have plummeted. The typical family may save $550 or more this year, money they can now spend on other necessities or things they enjoy. Winter heating bills will be lower. Should this trend last, auto and truck manufacturers will get a big break: People will buy bigger vehicles, which is where the juicy profit margins are.

So how do our politicians react to this good news? They make it yet another opportunity to pick people’s pockets. What’s ghastly about this is that a number of Republicans, at all levels of government, are buying into this gaseous idea. We all know that liberals never pass up an opportunity to grab more money, but the GOP is supposed to be the taxpayers’ friend.[…]

“Supposed to be” is the key phrase there.  Reagan has been gone A LONG TIME, and this bunch in charge now sure does like to play with other people’s money. MORE:

[…] An exasperated Larry Kudlow let loose at Senator Bob Corker (R–Tenn.), who is proposing to hike the federal gas and diesel tax by 12 cents a gallon over two years:

“What can [he] be thinking? On his first Sunday news-show appearance of the year, right at the beginning of a new Republican Senate era, does Corker communicate a new GOP message of growth and reform? Does he talk about business and personal tax reduction that might rejuvenate startups, higher wages and job creation? Does he talk about rolling back ObamaCare, or regulations in general? Does he discuss sensible immigration reform?… Free-trade promotion that will help consumers and businesses? Education reform? The Keystone pipeline? No. His first Republican message is: Raise the federal gasoline tax.” […]

Forbes also tears into the main arguments of the GOP tax-hikers:

– The Highway Trust Fund will run out of money in May. This is easy to swat down. The fund was created in the 1950s to build and maintain the Interstate Highway System. Federal levies on vehicular fuels were supposed to be truly dedicated monies, but since then–Washington being Washington–the fund has been plundered to finance mass-transit systems, hiking trails and all sorts of other things. Take out all the nonhighway stuff and voilà: The Highway Trust Fund is virtually balanced. 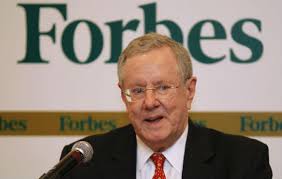 – Our infrastructure is crumbling, which is dangerous and hurts the economy. The real infrastructure crisis is government. Politicos don’t want you to notice that infrastructure isn’t a problem when free enterprise is in charge. Our freight railroad system is the best in the world, by far; no other nation even comes close. This unheralded triumph came about after railroads were deregulated in 1980. We have no “infrastructure crisis” regarding passenger aircraft, but we do have a problem with our technologically backward air traffic control system, which is under the thumb of the federal government. Transportation? No shortage of cars and trucks. Energy? No shortage of filling stations. Moving oil and gas? Tens of thousands of miles of pipelines crisscross the nation. While President Obama wails about infrastructure, he blocks the Keystone XL pipeline and hobbles permits for liquefied natural gas terminals, nuclear power plants and dams.

– Higher gas taxes will help save the environment. No, they won’t. They’ll make us poorer, which is bad for everything, including the environment. Poor nations have lousier environments than do rich ones. Cars emit a tiny fraction of the pollution they once did. The big, bad thing in gasoline–lead–was dealt with decades ago, when it was removed.

– Europeans have significantly higher gas taxes than we ever will. Why bellyache about an increase that would be a rounding error in most developed countries? Those countries are densely populated; Great Britain (pop. 64 million) would comfortably fit into Oregon (fewer than 4 million). We are a vast, continental nation, and we do considerably more driving. Besides, we’re already overtaxed, as are most other nations these days–a key reason that the global economy is in trouble.

2 thoughts on “Steve Forbes ON THE MONEY in re: gas tax”