if you want money from the Department of Homeland Security, you will need to start keeping track of the immigration status of suspects you arrest.  That’s the reality congressman Walter Jones seeks with the introduction of HR 1888 —  The Jamiel Shaw, Jr. Memorial Act of 2013.    Jones’s bill is named after a  young black American male from California murdered by an illegal immigrant from Mexico.

Jones’s bill has been stalled in Congress.  But Shaw’s family has gone to the halls of Congress to push for its advancement and approval:

The father of an American murdered by an illegal immigrant made an impassioned plea to Congress Wednesday to adopt policies to prevent it from happening again.

“My family’s peace and freedom were stolen by an illegal alien from Mexico. He was brought here by his illegal alien parents and allowed to grow up as a wild animal,” Jamiel Shaw testified before an Oversight and Government Reform panel about the murder of his son Jamiel Shaw II at the hands of Pedro Espinoza.

Shaw said that while some ascribe good qualities to illegal immigrants brought to the U.S. as children, they are not all good.

“Some people believe that if you are brought over by no fault of your own that it makes you a good person. They want us to believe that DREAM Act kids don’t murder. I am here to debunk that myth. Kids brought over the border by no fault of their own do kill Americans. How many American’s killed by illegal aliens are too many?” Shaw said, explaining that as a parent of a murder victim, “one is too many.”

Shaw described how his son was murdered while walking on the street three doors away from his home by an illegal immigrant recently released from jail.

“He shot my son in the stomach and then in the head. Killing him. Do black lives really matter? Or does it matter only if you are shot by a white person or a while police man? The district attorney proved in court that my son was murdered because he was black and wearing a spiderman backpack,” Shaw said.

The grieving father said that he believed that the death could have been prevented. “Jameil shouldn’t be dead,” he testified. 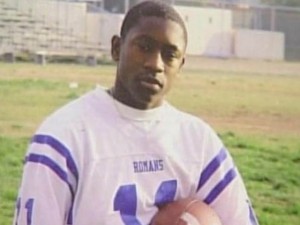 Shaw referenced the recent uproars over the murders of young African American men and the meme “Hands up. Don’t shoot,” that some have adopted as a rally cry.

“I see in here black politicians, black athletes, black stars say ‘hands up don’t shoot.’ My son was shot in the head by an illegal alien gang banger, while he lay on his back with his hands up. He still shot him through his hand and to his head and killed him,” Shaw said.

He continued, explaining that his son believed he was safe from such violence.

Shaw went on to call on Congress to consider Rep. Walter Jones’ (R-NC) Jamiel Shaw, Jr. Memorial Act requiring states to report and track immigrant crimes and the FBI to publish those statistics.

North Carolinians For Immigration Reform and Enforcement (NCFIRE) has been publishing tallies and details on child rape arrests of illegal aliens in North Carolina over recent years.