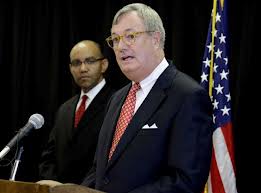 The developments so far  at DENR — and the ensuing reaction of the loony left and its media allies — are starting to give me some hope for Team Pat in Raleigh.

John Frank at The N&O is sounding the alarm about DENR Secretary John Skvarla and his introductory memo to agency employees, which Mr. Frank believes “creates more questions than it answers.”

What is it that is causing  Frank and his comrades such great concern?  THIS:

On Tuesday, he issued a mission statement cautioning that environmental science “contains a diversity of opinion” and that “all public programs and scientific conclusions must be reflective of input from a variety of legitimate, diverse and thoughtful perspectives.”

The statement comes after comments Skvarla has made in news media interviews indicating he believes climate change is a controversy that remains unsettled. Although most scientists think that it is, there are some who dispute that there is global warming or, if there is, that it isn’t caused by human activity.

On Tuesday afternoon, Skvarla emailed employees of the state Department of Environment and Natural Resources introducing himself and praising the agency. He acknowledged DENR’s core mission remains protecting the environment.

He added that the department will be driven by three principles: customer service, balancing costs with benefits, and making sure that diverse opinions are considered. He attached a copy of the mission statement, which calls for a “collaborative stewardship” among citizens, businesses and regulators. […]

Wow.  Skvarla is encouraging employees to treat taxpayers with respect, to do cost-benefit analyses whenever possible, and to take other opinions into consideration. * How unreasonable.   What a tyrant.  *
Frank is following  the lead of WRAL’s Laura Leslie in giving The Sierra Club an excessive amount of air time to bash Skvarla for daring to question the leftist gospel of global warming.    (For those who don’t know, The Sierra Club is about more than saving cute little bear cubs.  For instance, they are pushing a program on local governments nationwide, called “Cool Cities”,  which — among other things, seeks to give government an extraordinary amount of power to micromanage energy consumption in your private residence.  WHO is the extremist here?  But I digress.)   For some reason, this guy from The Sierra Club is being treated like he’s Moses who’s just brought some stone tablets down from the mountain.
So, if I understand the media and loony left’s argument, we should accept global warming as FACT because so many people publicly endorse it?   Interesting.  What if Magellan had backed out of his voyage around the world because he believed the conventional wisdom of the time that the Earth was flat?  A fear of falling off the edge of the world would have delayed the advancement of western civilization.   What if Gallileo had backed off of his theory that the planets actually revolved around the sun because it might upset the church?
It’s really interesting to see the media  and the left bent out of shape at someone advocating the expression of diverse opinions.  They are usually hitting those of us on the right for allegedly doing the same doggone thing.  To the media and their loony left comrades, opinions and freedom of speech are great as long as THAT opinion and speech  match THEIRS.

One thought on “Skvarla @ DENR: So far, so good”