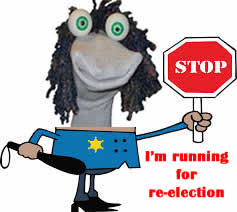 When she joined the Senate in 2009, Kay Hagan was an enthusiastic cheerleader for ObamaCare. She was one of the 60 votes FOR this monstrosity.  She’s stood loyally and dependably with Dingy Harry, Chuck Schumer and Barry Obama to fight off efforts to defund or kill ObamaCare.

As late as THIS YEAR, Hagan — affectionately known in many quarters as Sen. Chuck Schumer’s Sock Puppet™ — has told us that we’ll learn to LOVE ObamaCare once we learn more about it.

Now, with her polls in the toilet and opponents lining up against her, Hagan is calling for a delay in the law’s implementation:

Sen. Kay Hagan (D-N.C.) and Georgia Senate candidate Michelle Nunn added their names Thursday to a growing list of red-state Democrats calling on the administration to delay enrollment in ObamaCare.

Hagan recommended the Obama administration delay the penalty for the individual mandate and extend open enrollment for two months to make up for the time lost from people who have been unable to enroll in health insurance through the HealthCare.gov website.“Frankly, the Administration had plenty of time to get these websites user ready, and I would like to keep the pressure on to get these problems fixed sooner rather than later so that North Carolina families can get online and shop for the plan that suits them best,” said Hagan, who is considered one of the most vulnerable Senate Democrats in 2014.

Hagan also called on the administration to be fully transparent about its attempts to get the website running smoothly.

“Anything less than complete disclosure and accountability is not acceptable for me or the North Carolinians I talk to everyday,” she said. “The Administration must improve their communications with the American people about this very important issue.”

(*Oh, yeah.  If only this stupid web site was working correctly …*)

The problem for ol’ Kay?  During the so-called “government shutdown,” the Republicans proposed numerous options for delaying the implementation of the law.  But she toed the party line and voted them all down.

You’re going to hear a lot of garbage during the coming election campaign.  But every time you see Kay Hagan’s face on TV, one of her signs on the roadside, or see / hear one of her commercials — think of your increased insurance co-pays and premiums. Those are courtesy of ObamaCare, and Kay Hagan’s undying loyalty to Harry Reid, Chuck Schumer and Barry Obama.