Well, the run-up to South Carolina’s presidential primary is already underway.  It’s an every-four-years ritual.  A 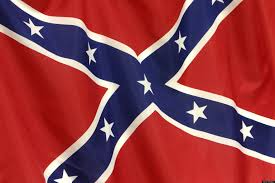 nd with that ritual comes another ritual — moaning and hand-wringing about the Confederate flag on the grounds of the state Capitol in Columbia.

*Speaking as a native-born Southerner, I can’t begin to tell you how much we, um, appreciate it when arrogant Yankees lecture us on what’s good and proper for us.  Especially after seeing what those same Yankees have done to their own states and major cities.*  (But, I digress.)

Anyway, every time this primary rolls around — or when there is a major statewide race in The Palmetto State — the drivebys get overheated demanding of all of the candidates ‘When is the flag coming down ????”

Jeb Bush and Mitt Romney have already given the drivebys what they want. The other candidates — who actually want to win the state — are not touching the issue with a 10-foot pole.  Former South Carolina governor David Beasley (R) tried to appease the drivebys by calling for the flag to be removed.  That gaffe, during his 1998 reelection bid, took what had been a slam-dunk win and turned it into the first win of the governor’s office by Democrats in decades.  (It was also the last time a Democrat held the office.)

The Washington Examiner says the SC GOP needs to take down the Confederate flag in order to “save” itself.  Really?  The GOP owns South Carolina government at every level.  The state’s Democrat Party is pretty much a non-factor. (I think they have a handful of legislators and Jim Clyburn.)  The Stars and Bars is still flying on the Capitol grounds.  I don’t see this suffering the Washington and New York media claim the GOP is undergoing.

The drivebys and the Democrats are trying hard to tie the flag to the shooting in that Charleston church.  That kid was mentally deranged.  I believe — if you look into his case close enough — you’ll see more of a failure of the social welfare net to properly deal with someone who needed serious mental health care than you will any kind of political meme.

Many South Carolinians — as well as Southerners, in general — see the Stars and Bars as an important symbol of their heritage.  Contrary to what leftist revisionists want you to believe, the War Between The States was not about slavery.  The great majority of people who wore the grey of the Confederacy in battle never owned slaves.  Most people saw that bloody struggle as an effort to resist government tyranny ( oppressive tariffs, et al.).

Of course, neo-Nazis and the Klan have misused the Stars and Bars.  But do the actions of a dwindling number of extremists, and the awful acts of a seriously disturbed young man, really warrant going here?

This actually reminds me a lot of the old birth control distraction George Stephanopoulos hit Romney with in 2012.  We’ve got terrorism back on the rise, a disastrous economy, ObamaCare ravaging our society, and our presidential campaign coverage is basically parroting a story line from an episode of Jerry Springer?

Our drivebys have done more damage to American society in the last few decades than that flag has.  (Ask the folks who live in Ferguson, Missouri and Baltimore.)