Some people really don’t know when to shut up and melt into the background.  We so did not need to hear from this guy: 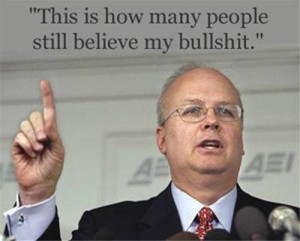 When Chris Wallace asked Rove how we can, “stop the violence,” the long-time gun-rights advocate stated that we have made great strides as a nation in empathizing with the victims of these types of shootings, but the only way to guarantee they will stop is to “remove guns from society.”

WALLACE: How do we stop the violence?

We saw an act of evil. Racist, bigoted evil, and to me the amazing thing is that it was met with grief and love. Think about how far we’ve come since 1963. The whole weight of the government throughout the South was to impede finding and holding and bringing to justice the men who perpetrated the [Birmingham] bombing.

And here, we saw an entire state, an entire community, an entire nation come together, grieving as one and united in the belief that this was an evil act, so we’ve come a long way.

Now maybe there’s some magic law that will keep us from having more of these. I mean basically the only way to guarantee that we will dramatically reduce acts of violence involving guns is to basically remove guns from society, and until somebody gets enough “oomph” to repeal the Second Amendment, that’s not going to happen.

Wow.   Never mind that some of the most crime-ridden areas of this country have the strictest gun control laws.  Never mind that most all of these high-profile massacres occurred in gun-free zones.  So, with this Charleston thing, the drivebys and the GOPe are blaming (1) the Confederate flag, and (2) the Second Amendment.  Not one mention of the mentally-deranged freak who perpetrated the crime.

How many of these types of crimes would you have, if the probability that someone in the immediate vicinity might pull out a concealed weapon and shoot the gunman increased dramatically?  Not too many, I wouldn’t think.

Our Founding Fathers thought the right to bear arms was so important to protecting our freedom from governmental tyranny that they wrote it down.  Guys like this muse about it publicly.  But don’t think for a minute that guys like Rove wouldn’t pull this repeal thing if they got the chance.  Don’t settle for repealing one freedom.  Because these people rarely stop at one.  Give them an inch, and they’ll take a mile.

Voting for Jeb Bush in 2016?  A vote for Jeb is a vote to bring Uncle Karl back into power for at least four more years.