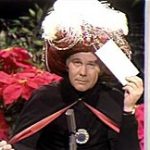 Gosh, I’m looking almost psychedelic — er, psychic — on this state election investigation in the 9th congressional district. Democrat partisans have tried to use the probe to block the seating of congressman-elect Mark Harris in the US House — citing allegations against a Republican operative in Bladen County.  But now, it’s starting to look like a Democrat powerhouse may have had a much bigger role in any election mischief in the 9th:

Victory in the fight for a District Court bench position in Robeson County has been snatched from Vanessa Burton — at least for now.

The North Carolina Board of Elections on Friday elected not to certify the results of the District Court 16B Seat 2 race. 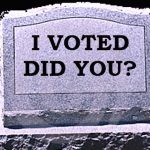 The contest between Burton, a Democrat, and Jack Moody, a Republican, has been caught up in the storm of voter fraud claims that has overtaken the race for the N.C. District 9 seat in the U.S. House of Representatives between Mark Harris, who appeared to have won, and Dan McCready, who conceded after the Nov. 6 general election votes were counted.

[Robeson] County [GOP] Chairman Phillip Stephens wrote in a statement, “We agree with NCGOP State Chair Robin Hayes who released a statement this evening that we are in rare agreement with the editorial board of The Charlotte Observer that basically echoed our view. An election certification is being held up. The authors of the delay are being a bit coy about the delay. The public is in the dark. The lack of information is shameless partisanship and questions remain as to whether the issues being raised were widespread enough to alter the election.

“We are aware of a few absentee ballot issues in Robeson. But they were instances that favored Democrats, not Republicans.” […]

EXACTLY.  Isn’t it interesting that the media only wants to talk about the GOP operative in Bladen County, when it appears that a judicial race, congressional race and possibly many 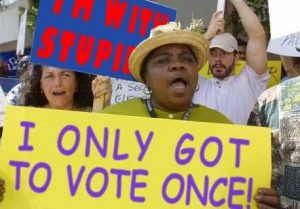 others were tainted in much larger, more-Democrat Robeson County?

That’s right.  More people voted in that race in Robeson County than there are registered voters in Bladen County.  And all we’re hearing about in the driveby media is Bladen County.

The judicial race between Moody, who works in the Public Defender’s Office, and Burton, an assistant prosecutor in the District Attorney’s Office, has been wrapped in drama since the polls closed on Nov. 6. Initial counts showed Moody to be the victor, but only by 138 votes. He led by 77-votes after absentee ballots were counted. Moody’s lead became a 71-vote deficit after provisional, or challenged, ballots were counted on Nov. 15.

But Burton’s margin of victory was below the 1 percent of all votes cast threshold that permits a recount request. Moody requested a recount.

Remember the good old days when elections ended on election day ?   Now, we have all of these different ways to vote, with so many pots of ballots floating around out there — therefore providing so many opportunities to cheat.

[…] In the congressional race, vote totals show Harris is ahead of McCready by about 900 votes. McCready won Robeson County by 17,003 votes to Harris’ 12,543 and Libertarian candidate Jeff Scott’s 757. The GOP has held the district since 1963. Rep. Robert Pittenger, the incumbent, lost to Harris in the primary.

[…] A state Elections Board press release reads in part, “In a bipartisan decision Friday, the State Board of Elections and Ethics Enforcement decided to hold a public evidentiary hearing into claims of irregularities and fraudulent activities related to absentee by-mail voting and potentially other matters in the 9th Congressional District contest. The State Board has not certified results in that race.”

The hearing is to take place on or before Dec. 21.

The vote on a hearing came after state board members voted 7-2 on a motion made by board Vice Chairman Joshua Malcolm, of Robeson County.

Absentee voter envelopes were electronically sent by the Robeson County Board of Elections to the state Elections Board on Thursday, according to a staffer who asked not to be named. Each envelope has the voter’s signature and the names of the voter’s witnesses. The state board did not explain why the documents were requested.

County Board of Elections Chairman Steve Stone confirmed that the envelopes were sent to the state. But, he, like the staffer, did not know how many were sent.

Stone does know that the the District 9 U.S. House seat will remain vacant until the voter fraud issue is resolved. District Court 16B Seat 2 will remain occupied until Judge Herbert Richardson retires at the end of the year.

It is possible that the state Elections Board could call for new elections in both the congressional and judicial race, Stone said. Beyond that, he can’t predict what will happen because it’s all up to the state board.

In the congressional race, vote totals show Harris is ahead of McCready by about 900 votes. McCready won Robeson County by 17,003 votes to Harris’ 12,543 and Libertarian candidate Jeff Scott’s 757. The GOP has held the district since 1963. Rep. Robert Pittenger, the incumbent, lost to Harris in the primary.[…]

There likely were hijinks perpetrated within that congressional district on election day.  But a truthful, honest examination will show they benefited Democrats much more than Republicans.