We’re starting to learn a valuable lesson here.  If  a DC Republican wants to nominate you for something, BEWARE.  The minute leftists say the slightest negative thing about you, your Republican brethren on The Potomac will drop you like a hot potato and hang you out to dry like this morning’s laundry.

Raleigh’s Tom Farr is the latest to learn this lesson — THE HARD WAY.  Farr got nominated to fill a vacant federal court seat serving North Carolina.

He’s been run through the driveby media meat-grinder with nary an assist from his fellow GOPers.  Leftist dirtbags from The Round Rev to Al Sharpton to the ACLU performed a virtual colonoscopy on him.  They painted him as racist.  Their evidence?

His work for the campaign of the late US Senator Jesse Helms in 1990 and his defense of the NC General Assembly’s election reforms.

Leftists are successfully painting employment by the late senator as the equivalent of Klan membership.  The worst part of it is:  The NCGOPe is letting them get away with it.

Senate.  They both allowed the nomination to linger in the Judiciary committee while the ‘racism’ war drums beat louder and louder.

The nomination finally made it to the Senate floor in November.  It took a tie-breaking vote by Vice President Mike Pence — IN A REPUBLICAN CONTROLLED SENATE — to end a filibuster.

Apparently, South Carolina’s Tim Scott (R) has started sipping on some of the crap his fellow South Carolinian Lindsey Graham-nesty has been imbibing for years:

Tim Scott of South Carolina, the lone black Republican senator, said on Thursday that he would oppose the judicial nomination of Thomas A. Farr, a lawyer who defended a North Carolina voter identification law and a partisan gerrymander that a federal court said was drafted to suppress black votes “with surgical precision.” 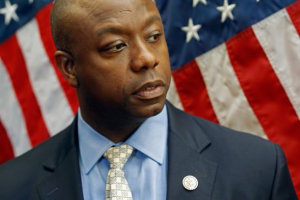 Mr. Scott will join Senator Jeff Flake, Republican of Arizona, who has vowed to oppose every White House nominee unless the Senate votes on legislation to protect the special counsel, Robert S. Mueller III. With Democrats united against Mr. Farr, his nomination to a United States District Court appears doomed.

[…]Mr. Scott said on Thursday that he was ultimately too troubled by Mr. Farr’s involvement in one of former Senator Jesse Helms’s racially tinged campaigns. The senator cited a Justice Department memo published this week by The Washington Post detailing an investigation the department launched into the campaign in 1992. The department accused Mr. Helms of intimidating black voters by sending out postcards that suggested they were not eligible to vote and that they could be prosecuted for fraud if they tried. […]

I am soooooooo tired of this lie about 1990.  I was on Helms’s DC team during the 1990 campaign.  The postcards sent out reminded black voters of the consequences of polling place misbehavior: voting twice, voting outside your place of residency,  paying for votes or accepting cash or other gifts for votes, voting under a fake registration or alias, voting with a felony record.

It wasn’t voter suppression.  It was a reminder to BEHAVE and FOLLOW THE LAW when  you vote.  It’s like calling a speed limit sign on  the highway an act of “driving suppression.”

It was an early attempt at halting what we are still trying to fight THIS YEAR with voter ID and other reforms.  In January of this year, I wrote about the “Bush Justice Department official” who wrote the memo that got this whole “voter suppression” ball of wax rolling:

The lefties are pounding away at Trump judicial nominee Tom Farr for, among other things, his work on behalf of the late US Senator Jesse Helms.  At the heart of the leftist attacks is testimony from “former Bush Justice Department official” Gerry Hebert.

Hebert was a harsh critic of some postcards sent out by the 1990 Helms campaign to black voters, and has resurfaced to claim: Farr (1) was behind the postcards, and (2) lied about them to the Senate.

Those of you who follow politics and government like I do know that administrations change in DC and Raleigh, but there are whole classes of worker bees who hang around for decades carrying out policy.

And working for the US Justice Department doesn’t make you an indisputable saint and American hero.  Ramsey Clark served as LBJ’s attorney general.  He went on to serve as a mouthpiece for some of the most radical communist-leaning political organizations nationally and internationally.

But back to Hebert.  The anti-Farr forces and drivebys neglect to mention Hebert’s current role with a radical leftist think tank in DC with the rather innocuous-sounding name of  The Campaign Legal Center.

The group’s “Litigation Strategy Council” includes renowned North Carolina lefties Anita Earls and Walter Dellinger.   Hebert, himself, is a regular talking head on MSNBC to bash attorney general Jeff Sessions.  He even fought Sessions’ confirmation as AG and his 1981 nomination as a federal judge.

Hebert is also a regular talking head on something called The Real News Network.

RNN describes itself like this: “[…] We cover the big stories of the day, but we broaden the definition of what’s important: the movements for working peoples’ rights, for peace, for the health of our planet, and against racism – are news. […] ”

(*Look out Newsmax and Fox News!*)

RNN’s board includes somebody described as “an ethnomusicologist” and the actor Danny Glover — whose politics make Stalin’s look pacifist and loving.

Scott didn’t stop with Farr.  He’s had other problems with other Trump nominees:

[…] Mr. Scott’s decision marks the second time he has brought down a White House judicial nominee who was seen as insensitive or hostile to African-Americans. He had previously helped to sink the nomination of Ryan W. Bounds over his writings in college, which upbraided “race-focused groups” on campus and “race-think.”

The Republican Party, Mr. Scott told reporters, is “not doing a very good job of avoiding the obvious potholes on race in America.” […]

So, add Tim Scott’s name to the growing list of black Republicans —  i.e., Colin Powell, J.C. Watts, Gary Franks, Mia Love — who have gained and grown under the Republican mantle but turned around to bite the hand that has fed them.

Speaking of Mia Love, she lost her reelection race in Utah in November:

[…] The Farr defeat comes just days after Representative Mia Love, the only female black Republican in the House, conceded her failed re-election campaign by blasting her party for ignoring the nation’s minorities. […]

*Sure.  Blame it on that massive black vote in Utah.*