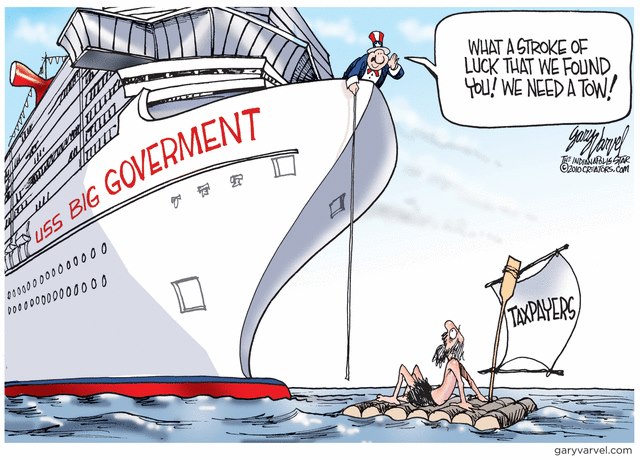 Supposedly, the Republican Party is about free markets, individual liberty, and reaping the rewards of hard work.  Yet, we can’t even seem to get the leaders of the party to say NO to the biggest, baddest, most blatant example of crony capitalism and big government meddling out there: The Export-Import Bank.

The Ex-Im Bank finances a lot of deals for politically-connected big corporations to do business with foreign entities.  An awful lot of its funds end up in the coffers of foreign corporations.   We work hard to stay afloat amid all kinds of regulations and taxes and other assorted government meddling, while the government confiscates our hard-earned gains and hands them over to billion dollar corporations here and abroad.

In 2010, The Tea Party movement gave the GOP big gains in DC, while under the impression they would use this new power to shrink government and abolish waste and abuse like the Ex-Im Bank.  But since then, the GOP has worked hand-in-glove with the rest of the DC establishment to breathe new life into it.

Big corporations — the kind that pay lobbyists and fund big PACs that dump money into political campaigns — really, really LOVE the Ex-Im Bank. The US Chamber of Commerce — which has dumped a lot of PAC money into Republican pockets on Capitol Hill — LOVES the Ex-Im Bank.

Conservatives are being pressured into holding their noses and voting for less-than-palatable Republicans in November.  We’re told that it’s necessary to get that horrible Harry Reid out of power, and to put a check on Barry Obama.

Let’s think about that.  Harry Reid and Barry Obama think ObamaCare is OK, and have no intention of defunding it or slowing it down.  DC Republicans have made it clear on multiple occasions that they have no plans to defund or slow down ObamaCare. Barry Obama and Harry Reid like the Ex-Im Bank.  Yet, Renee Ellmers and the leadership of the Republican National Committee can’t bring themselves to say NO to Ex-Im.

As the lines / differences continue to blur, we have to ask: Why should we vote Republican, again?  What difference will it truly make?

In Raleigh and in DC, the predominant sentiment is in favor of managing government — not weakening or shrinking it.  It’s about controlling people — showing them how much they “need” these bureaucrats and politicians and agencies.  TWO groups fighting over who gets to control us.

I’ve said it before. I’ll say it again. WE ARE ON OUR OWN.