The drumbeat continues.  Local governments and their lobbyists are gung-ho on the idea of digging deeper into our already ravaged wallets.  They’ve been spinning us for days now about how the mean ol’ GOP in Raleigh has hurt them financially.  I’m not hearing a peep about fiscal responsibility or cutting spending.  *They’re gonna spend.  We need to cough up more.  Case frickin’ closed.*

Well, another shoe has dropped in this quest for mo’ money:

Cities and towns could ask state legislators for a special sales tax within municipal boundaries to make up for $62 million in lost privilege tax revenues.

The legislature earlier this year repealed the privilege tax, which opponents consider an unfair and uneven way to tax businesses. But mayors fear they’ll have to raise property taxes to fill the budget hole, and they want other revenue options.

With the privilege tax repeal going into effect in July, revenue was the hot topic Thursday as the N.C. League of Municipalities set its lobbying priorities for the new legislative session.

“Our foundation was always low property taxes,” said Paul Meyer, the league’s executive director. “As city revenues decline, the only place elected officials can go is to the property tax … and that’s going to hurt our economic development.”

“I’m going to hold (legislators’) feet to the fire and remind them,” McCrory said. “We’re interested in figuring out how to make up that revenue and give you more options at the city and county level regarding revenue streams.”

Oh, goody.  Never mind asking them to tighten their belts first.  We’ve all been doing that for some time in this godawful economy. MORE:

[…] The League of Municipalities’ legislative agenda approved Thursday calls on legislators to give sales taxing power to cities and towns. Currently, only the state and counties have that power – a city sales tax, if approved, would come on top of existing state and county sales tax rates. 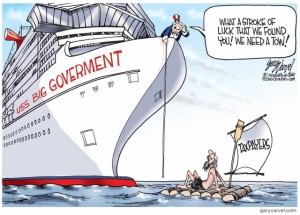 The league also recommends the state apply sales taxes to more services, though it doesn’t specify which ones. Last year, the legislature expanded the tax to apply to admission tickets for sports, movies and other events.

Cities and towns could join counties in charging hotel occupancy taxes as well. Getting that power is also on the league’s wish list, with the goal of funding services and infrastructure “in order to support travel and tourism.”

Okay.  So, increasing property taxes is going to hurt economic development, but piling on a FOURTH level of sales tax WON’T ???  Given the fact that we have a GOP majority on Jones Street, it might lead one to think this agenda has no chance in hell of passing.  (But, never say NO CHANCE.  Look back at the ol’ CRomnibus thing in DC.)