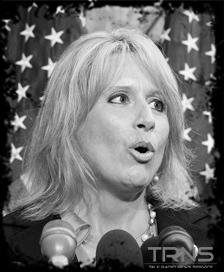 She slipped into office in 2010 with enthusiastic Tea Party support — vanquishing Bob ” The Sidewalk Assassin” Etheridge.  Lefties beat her up as a stalking horse for “tea-baggers.”

But not long after being sworn in, Renee Ellmers made a beeline for John Boehner and the House leadership. She got praised by The New York Times as a field commander pushing the party leadership’s agenda.

We wrote earlier about Renee’s affiliation with The Ripon Society — a group of liberal Republicans that fought Barry Goldwater in 64, and Ronald Reagan in 1976 and 1980.  They’re looking to get those church people and those Wal-Mart shoppers OUT of positions of influence in the GOP.

A check of her campaign finances for the current election cycle turns up a $2,500 donation from something called The Tuesday Group.  What’s that you ask?  Well, Eleanor Clift — the longtime token liberal on The McLaughlin Group — describes it as ” a refuge for less conservative members” of Congress.

The Tuesday Group, a moderate-Republican caucus long ignored within the House GOP, is quietly starting to fight back against the conference’s right turn.

At a meeting this week, Representative Steve Womack of Arkansas confronted House majority leader Eric Cantor on a topic sufficiently sensitive that all of the congressional staffers in the room were asked to leave.

Womack wanted to know what Cantor was doing about the role of “outside groups” such as Heritage Action, Club for Growth, and others that work to hold Republicans to conservative principles.

Sounds familiar.  We wrote earlier about Ellmers’s frustration with the pressure conservative groups were putting on Republican Members of Congress.  MORE:

The brief skirmish was a sign of life for the beleaguered Tuesday Group, which has seen its numbers and influence wane in recent years. The group’s obituary has essentially been written numerous times (The New Republic ran a 2011 profile titled “Tuesday Mourning”).

“It’s an ongoing feeling that our party has some external influences that are putting political purity well ahead . . . of our ability to basically hold the majority that we currently have,” Womack told National Review Online in an interview.

Responding, Cantor noted that it wasn’t the first time he had heard the concern. Indeed, it’s something of a perennial complaint from a good number of House Republicans, though one rarely voiced in public. For instance, at a recent retreat for GOP-leadership staff, one speaker asked sarcastically, “oh, everybody in the room doesn’t like Heritage Action?” to raucous laughter, according to someone who was present.

But only three House incumbents actually lost primary elections in the last cycle, Womack says the Virginia leader argued, and that was due to particular weaknesses of those candidates, rather than especially strong primary challengers or outside groups.

While Cantor said he understood their concerns, he ultimately put the burden back on the moderates. “The best weapon against those kind of targets is to win,” he said.

Despite its marginal position, the group, led by the gregarious Pennsylvania representative Charlie Dent, has been quietly making its objections known over the past few months on topics such as the House’s recent late-term abortion ban, the debt-ceiling negotiations, and the influence of outside groups.

After Speaker John Boehner struck an agreement to extend the debt ceiling with a group of five key conservatives at the GOP’s January Williamsburg retreat, Dent complained to the Republican leadership that the deal was made without the knowledge or consent of rank-and-file members.

On immigration, the moderates fought and seem to have lost a key battle over whether the House should only introduce a bill if it has the support of the majority of the GOP conference, in accordance with the so-called Hastert Rule. (Without the restriction, an immigration-reform bill is more likely to pass both the House and the Senate.)

Depending on your perspective, the group’s restlessness can be a good or bad thing.

One GOP aide explained to me, “I wish the Tuesday Group were more active. It would help fight the caricature that we are all a bunch of right-wing nutjobs.”

But conservatives tend to chafe at what influence the group does have, since it is a such a small share of the conference.

Tuesday Group members will “get up in a [meeting of the Republican caucus] and express a point of view and basically, the leaders listen to them, but everybody else sort of tunes out,” said former representative Steven LaTourette of Ohio, now the president of the moderate Republican Main Street Partnership.

“It’s a question of numbers,” LaTourette says. “If you think that the Republican Study Committee has 150 members out of 233 and the Tuesday Group’s sitting at 36, 40 — well, the math doesn’t work in their favor.” But, he points out, “without the 40” from the Tuesday Group, Republicans don’t have a majority. He laments, “you call ’em RINOs and squishes and all this other business,” but they’re “people who represent [their] districts.”

LaTourette complains that conservative adherence to the Hastert Rule means less legislation gets through Congress. “With this majority-of-the-majority thing,” he says, “you can’t have a resolution that does anything but passes the House, dies in the Senate, never gets the signature of the president.”

That’s not enough for the Tuesday Group, and increasingly, they’re letting people know.

So, Renee Ellmers — once the darling of The Tea Party — is now the doyenne of the DC GOP establishment.  Not long ago — May 2012 — Renee was running ads describing herself as a down-the-line social and fiscal conservative.  But she’s affiliated with two DC groups that think social issues are nonsense and government spending is really not all that bad.  Renee’s either trying to fool US or fool THEM.

6 thoughts on “Renee Ellmers: hugging up tighter to the GOP’s left wing”