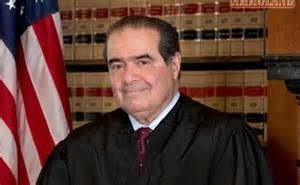 We lost a great man this weekend.   He was one of the few souls left in our nation’s capital who still believed our Constitution is worth respecting and paying attention to.

It is disheartening to listen to our elected leaders and drivebys speak about Justice Scalia in a manner akin to discussion of The Super Bowl, the race for the National League pennant, or March Madness.  *Oh, it’s going to shift the balance from 5-4 conservative to 4-5 conservative!*

Supreme Court was established as a check on the other two branches of government.  In modern times, politicians have ceded more and more legislative authority to this unelected group.  And, due in no small part to the misdeeds of our current vice-president, nominations for the court, and lower federal courts, has become deeply politicized.   Surely, Hamilton, Jefferson, and Madison could never have imagined a nominee’s views on funding Planned Parenthood, Adam and Steve getting “married”,  or single-payer nationalized health insurance as bases for determining said nominee’s fitness for the high court.

Who would have thought that it would become controversial to actually follow the language established by our founding fathers?

Since 2001, we’ve watched an incredibly rapid erosion of our rights and freedoms. Statists are working to make US citizenship a joke — an afterthought.  Our kids are being taught that their relationships with this week’s sex partner is no different from Mom and Dad’s thirty year marriage. Our ability to actually do what we wish with our own property — and actually live life under the protections of the Bill of Rights — hangs in the balance with these appointees vetted and approved by the amoral, boozing, lying, thieving blow-dried scalawags on Capitol Hill.

Heroes like Scalia, Thomas, Alito – -and in some cases, Roberts — have stood up and held the line against further trashing of our freedoms.  But that work needs to shift back to the legislative and executive branches.  In 1994 and 2010 we got promised a radical shift of power back to the people.  What we got, instead, was a complete surrender to statism.

ina’s US senators will get to play a key role in the future direction of The Supreme Court.  Thom Thilli$$$, for some reason, sits on the Judiciary Committee.  Any nominee the president submits would have to pass muster with that committee.  Of course, Loretta Lynch already made it through this same group. Thilli$$$, for what it’s worth, has said he favors waiting for the next president to pick Scalia’s replacement.

Spineless Richard Burr is up for reelection this year.  He gave two thumbs up to Obama’s attorney general Loretta Lynch.  He also highly praised Judge Max Cogburn — the leftist hack who dreamed up rulings that threw out our state constitution’s marriage amendment and that threw our congressional elections into their current state of chaos.   I’m not real comfortable with his decision-making, either.

The GOP Senate has fallen all over itself to appease Obama since 2014.  Do they have the guts to stay in session

non-stop until the November elections, in order to prevent a recess appointment by Obama?

We need to take a stand and END the policy-making and legislating by unelected folks in black robes.  We need some leadership.  With Scalia’s passing, I had the same disheartened feeling as I did with the passing of Ronald Reagan, William F. Buckley, Jesse Helms, and Andrew Brietbart.  Those were great warriors for freedom and individual liberty.  But to keep this great American experiment going strong, we need some younger folks to step in and try to fill their shoes.  Guys like Ted Cruz and Mike Lee are trying to get it done.  But they need a lot of foot-soldiers to stand with them in the fight.

Until we take our country back, we need to be mindful of the fact that the future of our country, and the continuation of our special freedoms, could very well be in the hands of Barry Obama, his leftist ideologue Supreme Court appointee, and a spineless Republican Congress.