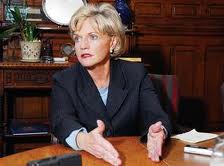 Surprisingly, the sycophants and apologists for all things portside in the newsroom at The Raleigh News & Observer first told us about Madame Governor suggesting elections should be postponed.  Then, their editor jumped in, threw the reporter who broke the story under the bus, and pushed for the headline to be changed to reflect that Bev was just “joking.” Edtor Dan Barkin blogged:

New audio of the speech in question — leaked to DC-based The Daily Caller —  appears to vindicate Drudge and raise questions about the ethics and credibility of the newsroom at The N&O. (The full DC story and the actual audio can be found HERE.):

If it was a joke, North Carolina Democratic Governor Bev Perdue needs to polish her delivery.

Newly released audio contradicts the claims of Perdue’s press team that her call Tuesday for suspending Congressional elections was a joke or hyperbole. In the recording, her tone is matter-of-fact and her comments are part of a serious speech.

“Listen to the Governor’s words: She wasn’t joking at all,” North Carolina GOP spokesman Rob Lockwood told The Daily Caller. “The congressional Democrats are wildly unpopular in North Carolina, so she may have been trying to invent a solution to save their jobs from public accountability.”

“If it was a joke, what was the set-up?,” Lockwood adds. “What was the punch-line? Where was the pause for laughter? It took them three hours to say it was a ‘joke,’ but when that flopped it became ‘hyperbole.’ We’ll just call it an unconstitutionally bad idea.”

One of the more incredible parts of this story:  If you click through the link to listen to the audio, you will see a caption which says “Audio Captured By Raleigh News & Observer.”
What? How come the N&O didn’t provide the audio directly to its readers to see if they bought the explanation that Bev was just “joking”?
I listened to the audio.  She is not chuckling as she makes the comments.  There is no pause for laughter.  No laughter can be heard from the audience.
The N&O took a story out of context, slapped on an exaggerated / dishonest headline, and beat on Texas governor Rick Perry for four days.  Here, they broke their neck in a matter of an hour to help Bev’s staff do damage control.  Bev has the right letter in parentheses next to her name.  That is why they help her.
It is a shame that we can’t find anyone within the state’s alleged mainstream media (MSM) to tell the truth about what a true piece-of-work we elected as governor in 2008.