John Drescher’s pet shih tzu has authored a piece today attempting to explain what — besides anatomy, wardrobe, genetics, and choice of cosmetics — sets the two major party candidates in the US Senate race apart.  Tillis, fresh off of defeating an incumbent Republican, was serving his first term in the state House in 2007, while Hagan was going into her final term in Raleigh before heading to DC:

[…] That legislative session stands as a mirror image of today’s political situation, where most of the issues are still relevant but the power structure is reversed.

Hagan, then a state senator, supported a bill to allow same-day voter registration at early voting sites. Tillis, a state House member, opposed it. Tillis voted against a bill to provide up to $60 million to help keep two major tire companies in the state. Hagan supported it. And Hagan supported a second-year budget bill that increased the earned income tax credit and provided 3 percent teacher raises. Tillis opposed it.

“The Hagan-Tillis differences in 2007-08 seem similar to today’s differences,” said David McLennan, a political analyst and a professor at Meredith College who reviewed the session’s votes.

“The comparison shows how both candidates for the U.S. Senate seat have remained pretty consistent, with Hagan favoring more money to education and government services and Tillis wanting less,” he said. “It also demonstrates that Hagan has consistently supported progressive ideas around voting and campaigns, whereas Tills has favored conservative principles.”

Of the 12 major bills that received statewide attention that session, as tracked by the nonpartisan N.C. Center for Public Policy Research, Hagan and Tillis disagreed on half.

It’s unlikely Hagan and Tillis interacted much, if at all, those years. Back then, Hagan held a prominent position as a state budget writer who sat on the front row in her final legislative term.

Um — we’re taking about TWO different legislative chambers here.  Thom was in the back row of the House.  Kay was over in the Senate chamber.   Also, the same basic bills DO get considered by each chamber, but amendments offered in each chamber can change their flavor dramatically.  MORE:

She announced after the 2007 legislative session she would challenge then-U.S. Sen. Elizabeth Dole for the seat in 2008, a move that elevated her stature even higher.

Tillis was a first-term lawmaker in the minority party, relegated to the back row in the House, seat 118 of 120. But even then he was seen as a rising star in the Republican caucus and moved to a top post as whip the following session.

The session that brought them together started under a black cloud after former House Speaker Jim Black pleaded guilty to a federal public corruption charge and tougher ethics reforms remained a top issue. A bill to address the situation won unanimous approval in the House and Senate in August 2007. “I thought of the 2007 session as restoring public confidence in the process,” recalled Susan Valauri, then-president of the state lobbyists association.

Hagan and Tillis aligned on three other bills that received overwhelming votes:

OK. Can’t argue with that one. Next: 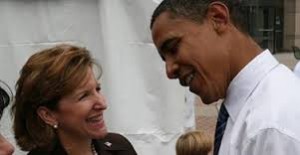 Hmmm.  Sounds a lot like ObamaCare ! What, pray tell, Mr. McClennan, is conservative about this? NEXT:

• The creation of a health insurance risk pool for residents who otherwise couldn’t afford coverage.

Again.  The stench of ObamaCare. NEXT :

Tillis also bucked many in his party to side with Hagan and Democrats on a bill that required North Carolina power companies meet renewable energy benchmarks.

This legislation is one of the biggest reasons we are paying through the nose for power.  Nothing conservative here. MORE:

Two sessions after Hagan left the statehouse, Republicans took control of the House and Senate and began to undo much of what Democrats approved in the 2007-2008 session.

One of the first bills Republicans pushed in 2011 repealed the real estate transfer tax. The GOP also let the earned income tax credit expire as planned and reduced eligibility for the pre-K program. An elections bill ended same-day voter registration and required a voter ID at the polls. In 2013, Republicans ended public financing for some statewide elected offices, a measure approved in the 2007 session.

Other issues from the past session also remain relevant in the current U.S. Senate race.

Earlier in the campaign, at a Republican primary debate, Tillis said he supported a repeal of the 2007 renewable energy requirements. The legislation, however, died in the House this session.

If House leaders, like the Speaker, truly support something, it doesn’t get killed in committee. MORE:

The Tillis campaign recently criticized Hagan’s “dismal record on coal ash” citing her vote in favor of the Solid Waste Management Act of 2007. Environmentalists cheered the legislation as a major victory, but Tillis’ campaign criticized the bill because it continued to allow the disposal of coal ash in unlined landfills.

What Tillis’ campaign didn’t mention is that he voted in favor of the bill on the preliminary second reading before he changed his mind and voted no on the final vote. His campaign didn’t return repeated messages this week to discuss his voting record.

The debate about whether to give private company taxpayer-funded incentives also remains in the spotlight with the possibility lawmakers may return again this year to address it.

Gov. Pat McCrory’s administration is pushing a bill, supported by Tillis, to create a $20 million cash incentive program to lure companies to North Carolina and add more money to existing incentive programs. The House blocked the bill at the end of the legislative session. It’s unclear why Tillis opposed the Democrats’ incentive package in 2007. […]

The little dog raises an interesting point here.  Why is the policy BAD when a Democrat governor wants it, but A-OKAY when a Republican governor wants the same thing? (I understand a lot of GOP House members were peppering their leaders with this same question during the debate on the abysmal HB 1224.)