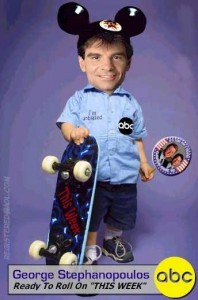 If you are like me, and don’t watch much TV — the senatorial debate last night gave you a great recap of all the “fun” you’ve missed.  The two major party candidates spent a good portion of their televised hour with George Stephanopoulos regurgitating the verbiage from their attack ads that have been bombarding TV viewers for weeks. If you’ve had the pleasure of viewing all those TV ads, you pretty much already saw last night’s debate.

(If I had played a drinking game last night, where I took a swig every time a lie got told, I would have been toes-up on the floor by the halfway mark.)

Write-in candidate John Rhodes, who did not get to participate in Tuesday evening’s affair, sent out a release offering up his two-cents on the whole event:

“What did we learn tonight? We have an incumbent senator who is so busy juggling hair appointments that she can’t be bothered to show up for work.  We’ve got a challenger who missed so much work in the General Assembly because he was in heat chasing hundred dollar bills through DC fundraising parties.  What a choice the two parties have blessed us with!”

Here is my take on the whole affair:

George Stephanopoulos:   Little Georgie was a bit of a pleasant surprise.  He didn’t pull a David Crabtree — interjecting himself and his lefty views into the programming. I was surprised that the Tillis campaign agreed to Lil’ Georgie as a moderator.  (But he did end up doing a pretty fair job.)

Kay Hagan: The senator stepped up her game this time.  She appeared incredibly frazzled, irritated and angry during the first debate. She seemed a lot more composed this time around.  But she still reminded me of one of those  frustrated, feminist American literature professors in college who can’t understand why the kids don’t get as jonesed about Sylvia Plath as she does. 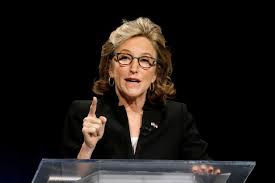 She got in a few good lines on Tillis.  After his second mention of his paper route and sixteen year stint in college, Hagan quipped: “It’s not about how you grew up, Mr. Speaker, it’s about how you treat people.”

Tillis rather inartfully tried to pin her in on the committee attendance question his latest round of ads has been posing.  He screwed up by repeatedly referring to her committee assignment as “Foreign Affairs.”  (The House has a Foreign Affairs Committee, while the Senate has a Foreign Relations Committee.)  Hagan rebuked Tillis by reminding him that she actually serves on the Armed Services Committee.  That also gave her the opportunity to recount discussions she had with senior defense department officials about various world crises.

Of course, she got in the lefty screeching about the minimum wage and fair pay for women — aimed at appealing to the countless low-information voters who get excited about stuff like that.  Tillis rather inartfully countered her arguments.  He meant — I think — to point out that it is already illegal to willfully discriminate on the basis of gender, so another law is unnecessary. Tillis countered with something about how an increase in the minimum wage costs too much.

Thom Tillis.  He did what he needed to do — come out swinging aggressively at the incumbent. Up until now, he’s been nicer to Hagan than he has been to his fellow Republicans to his right.  (I did notice that he dropped the whole “Kay” reference — going with “Senator Hagan” this time.) 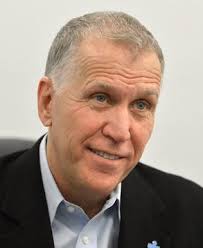 He had a grand opportunity to blast her for not showing up for work, but blew it by getting the name of her committee wrong.  It would make sense for her to have poor attendance at the Foreign Affairs Committee — since (1) she does not serve in the House, and (2) she is on the Armed Services Committee.  Raising the whole attendance thing gave Hagan a chance to fire back with the Charlotte Observer’s call for him to step down as speaker because the Senate campaign was taking him away too much from the fun on Jones Street.

The stories about Hagan family members getting rich off of the federal stimulus have been getting a lot of play, and have been raising the ire of the voters.  Tillis COULD have gone there — but doing so would have opened him up to questions about UNC board of governors appointments, movie incentives, beer wholesaler regulations, toll roads, trailer parks, and investment regulations among other things.

i can’t believe Tillis didn’t hit her harder for backing all of these leftist activist judges who are (1) dreaming up things that aren’t actually in The Constitution, and (2) cancelling out the will of the people and their elected officials.

If I did not know Tillis as well as I do, I might have found myself standing and cheering in front of the TV last night.  He said a lot of stuff about ” getting government out of the way” even though he worked hard to pass a huge, disgusting pile of pork through the House in the General Assembly session’s waning days.  He had the nerve to talk about how bad state health care exchanges are, even though he pushed approval for them through the NC House in 2011.

it was also interesting that he could not cite an example of where he would disagree with Republican leaders in Washington.  I could have named plenty of things.  I would not have gone along with raising the debt ceiling or these unconstitutional continuing resolutions or the funding of ObamaCare.

He finally came up with how he would not have voted to “shut down the federal government.” Seriously?  The sequester was part of a bipartisan deal — approved even by Big Barry — to institute automatic budget cuts if the Congress could not accomplish their primary constitutional duty of passing a budget.  First of all, the sequester cuts were a JOKE — a pittance when viewed in light of the overall spending orgy in Washington.  The GOP should have blasted Obama for being petty — doing things like cancelling fireworks for the troops and closing war memorials for aging veterans instead of getting serious about addressing the federal fiscal mess.

The sequester was actually a step in the right direction for fixing the mess in Washington.  The politicians and the scurrilous drive-by media made the situation look and sound a whole lot worse than it was.  With that statement, Tillis made it clear he won’t be straying from Mr. McConnell’s clique.

I believe Tuesday night hammered home a point.  Reelecting Kay Hagan gives you more of the same.  Electing Tillis gives us another Richard Burr, Lindsey Graham, or John McCain.  What a choice.

8 thoughts on “#ncsen: The thrilla (kinda) NEAR Chapel Hilla”