Banning Members of Congress from using sensitive information they obtain during the course of the business day to make investment decisions that pay off BIG? Sounds like a gimme. An easy YES vote.  But, think again:

Deborah Ross’s campaign is attacking Senator Richard Burr for a 2012 vote that Burr made against a bill banning insider trading for top federal employees and requiring that financial disclosures of members of Congress and their employees be made readily available online—all while he owned hundreds of thousands of dollars in stock in natural gas companies and authored legislation helpful to the natural gas industry.

Burr was one of just three senators, along with Democrat Jeff Bingaman and Republican Tom Coburn, who voted against the passage of the STOCK Act. (The final vote for the Senate was 96–3; in the House, it was 417 in favor and only two against.)

MMM-Kaaay. We’re talking here about the STOCK Act, a bill inspired by a great book written by Breitbart’s Peter Schweizer and the ensuing blockbuster ’60 Minutes’ exposé.   SURELY, the gentleman from North Carolina had a good reason for being ONE of ONLY THREE senators opposing the legislation. Here Burr is in a 2012 radio interview with a western North Carolina radio station:

[…]  BURR: Oh, another productive week. I think the United States Senate has had one vote, and we’re going to be embattled in legislation all week, and probably next week, which does no more than codify what existing law says.

JAMESON: Now let me guess, you’ve got to be talking about the STOCK Act. 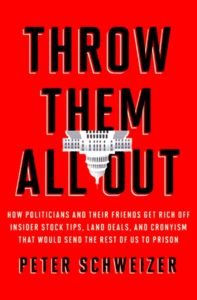 JAMESON: You know, I’ve asked some listeners for questions, and then I am mixing them in with some I have on my own, but that actually is something that somebody said, “Is it really necessary to pass law to make lawmakers follow laws that are already on the books?

BURR: It’s ludicrous. That’s why Dr. Tom Coburn and I were the two brave souls that walked up and said we shouldn’t be doing this. We should be focused on jobs, the economy. We should be taking up real legislation. It’s like me saying to you, “Jerri, before you come to work this morning and you’re going to drive your car, I’m going to pass a law that says you have to have a driver’s license.”

JAMESON: They just need to enforce laws that are already on the books.

BURR: The laws that are currently on the books apply to all members of Congress and all staff, not limited staff.

JAMESON: Right, it prohibits government workers period from engaging in these financial transactions.

BURR: So we’re going to have political theater this week as to whether it applies to the executive branch, whether it doesn’t. The fact is SEC law applies to every person who trades in America. […]

The Securities & Exchange Commission (SEC) is already doing a good job?  There are already plenty of laws on the books?  Let’s see:

[…] Burr’s assertion that the SEC law was doing a good enough job preventing insider trading ignored years of research to the contrary. A 2010 Wall Street Journal investigation showed that congressional staffers often had stock holdings in companies benefitting from legislation the staffers were pushing, and a 2004 analysis in the Journal of Financial and Qualitative Analysis showed “abnormal returns” in the stock investments of United States senators. (The researchers found the same conclusion seven years later, when they studied the returns on investment of members of the House of Representatives.)

I never thought of elected office as a route to get rich.  There aren’t — legally — the opportunities in government to increase your wealth that you so often find in the private sector.  MORE:

After Burr’s vote and loud defense of that vote, the Huffington Post investigated his own stock holdingsand found some interesting stuff.

Burr has investments in the gas industry valued from $133,298 to $219,337, according to his 2010 filings. His portfolio includes $36,000 worth of stock in Chesapeake Energy Corp., the second-largest U.S. producer of natural gas. He also holds more than $25,000 in shares of Loews Corp., a holding company with subsidiaries engaged in the exploration, production, marketing and transmission of natural gas.

Burr, along with Georgia Republican Sen. Saxby Chambliss, and two other senators introduced S-1863 in November with bipartisan support. The measure would offer individuals and businesses tax credits for buying natural gas-fueled vehicles or converting existing fleets to run on the fuel. President Barack Obama on Friday said he supported the bill.[…]

One thought on “#ncsen: Ross smacks Burr for opposing insider trading ban for members of Congress”