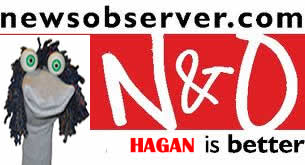 Chuck Schumer and the gang are afraid they might be at risk of losing their Kay so they are calling out the troops to save her neck from her angry constituents in 2014. Kay Hagan — our junior senator, also known affectionately in many parts as Chuck Schumer’s sock puppet™ — is inching closer to having to answer to the voters for her passionate support of ObamaCare, carbon taxes, tax increases, gays in the military, gun control and many other parts of the big government leftist agenda.

McClatchy-Raleigh — despite the glaring concerns about Public Policy Polling’s work — trumpets the Durham-based Democrat polling firm’s work like it was on those stone tablets Moses brought down from the mountain.  The latest dispatch from McClatchy’s MR. POLITICS, Rob Christensen, features the headline “Hagan’s popularity declines, but she would still beat Republicans”.

That’s the spin that Schumer, et. al. want to see, but experienced politicos looking at PPP’s findings see some very troubling things for Hagan, her campaign, and her supporters in and out of McClatchy newsrooms:

1.  Hagan’s approval rate is 36 percent, while her undecided number is at 23 percent.  She’s been representing our state for nearly six years, and there are nearly as many people undecided about her as there are approving of her.

2. Hagan is polling significantly under 50 percent in head-to-head matchups against ALL of her three prospective GOP opponents.  She’s pulling down 47 percent to 40 percent for Thom Tillis.  Hagan leads Mark Harris 46 to 38, and Greg Brannon by 46 to 40.  That’s a 13 to 16 percent undecided for each of the three matchups.  We aren’t told what the margin of error for this poll is.  (It’s usually anywhere from 3 to 5 percent.)  Undecideds tend to flock overwhelmingly toward the challenger as the campaign comes to a close.  Factor all of that in — and things are actually way too close for comfort for our favorite sock puppet.

It’s interesting that the remnants of our mainstream media are focusing so much on Thom Tillis and Mark Harris in the GOP primary.  Check out Rob’s piece today –– decorated with mugs of Tillis and Harris.  For some reason, we appear to be playing a game called “Pretend Greg Brannon Does Not Exist.”  The problem with that?  This Democrat poll shows Brannon polling better against Hagan than Harris or Tillis.  Documents I’ve seen show Brannon with a respectable fundraising showing compared to that of Tillis. (I haven’t seen any documentation for what Richard Burr has been able to do for Tillis with his DC special interest buddies.)   Fundraising emails from Kentucky Sen. Rand Paul — on behalf of Brannon — are already hitting email inboxes across North Carolina.

19 thoughts on “#NCSEN: Propping Up The Sock Puppet”