[…] The race here has moved from Democratic Sen. Kay Hagan’s four-point lead to a tie due, in part, to Republican Thom Tillis’ 10-point lead among independent voters – up from four points earlier this month.

Here’s the take from the New York Times’s Nate Cohn:

The Republicans still hold an edge in what has become a very stable fight for the Senate, according to the last round of data from the New York Times/CBS News/YouGov survey of nearly 100,000 respondents.

The Republicans lead by four percentage points or more in enough states to finish with 50 seats, just one short of the 51 they need to overcome Vice President Joe Biden’s tiebreaking vote in the Senate. The Republicans could go over the top by holding Georgia, where their candidate maintains a slight lead, according to YouGov, or by winning one of two very close races, Colorado and Iowa. Other recent polls have showed the Republicans with a small lead in Colorado and Iowa and a virtual dead heat in Georgia and Kansas.

Democrats hold slight leads of their own in North Carolina and New Hampshire. Republicans hold modest leads of at least four percentage points in Kansas, Alaska, Louisiana, Arkansas and Kentucky, according to YouGov. […]

Cohn and the Upshot analysts have downgraded Hagan’s chances of victory from 95 percent down to 88 percent.

So, what do we make of all of this?  Almost all of the polls show Hagan and Tillis hovering around the same numbers and within the margin of error.  It’s pretty clear neither one of the major party candidates is firing up the electorate.  The key to victory in 2014?  GOTV (Get Out The Vote.)

Even more than previous years, who shows up on election day will be what matters most.  Both major party camps have GOT to fire up their base and get them out of the house and down to the polls.  North Carolina Democrats have some incentive.  Hagan is one of the few statewide elected officials they have left.

North Carolina’s third day of early, in-person voting netted nearly 50,000 ballots, making a total of 283,758 in-person early votes cast and accepted (reminder: these are accepted votes, and excludes the spoiled ballots that may not have correct information when submitted). 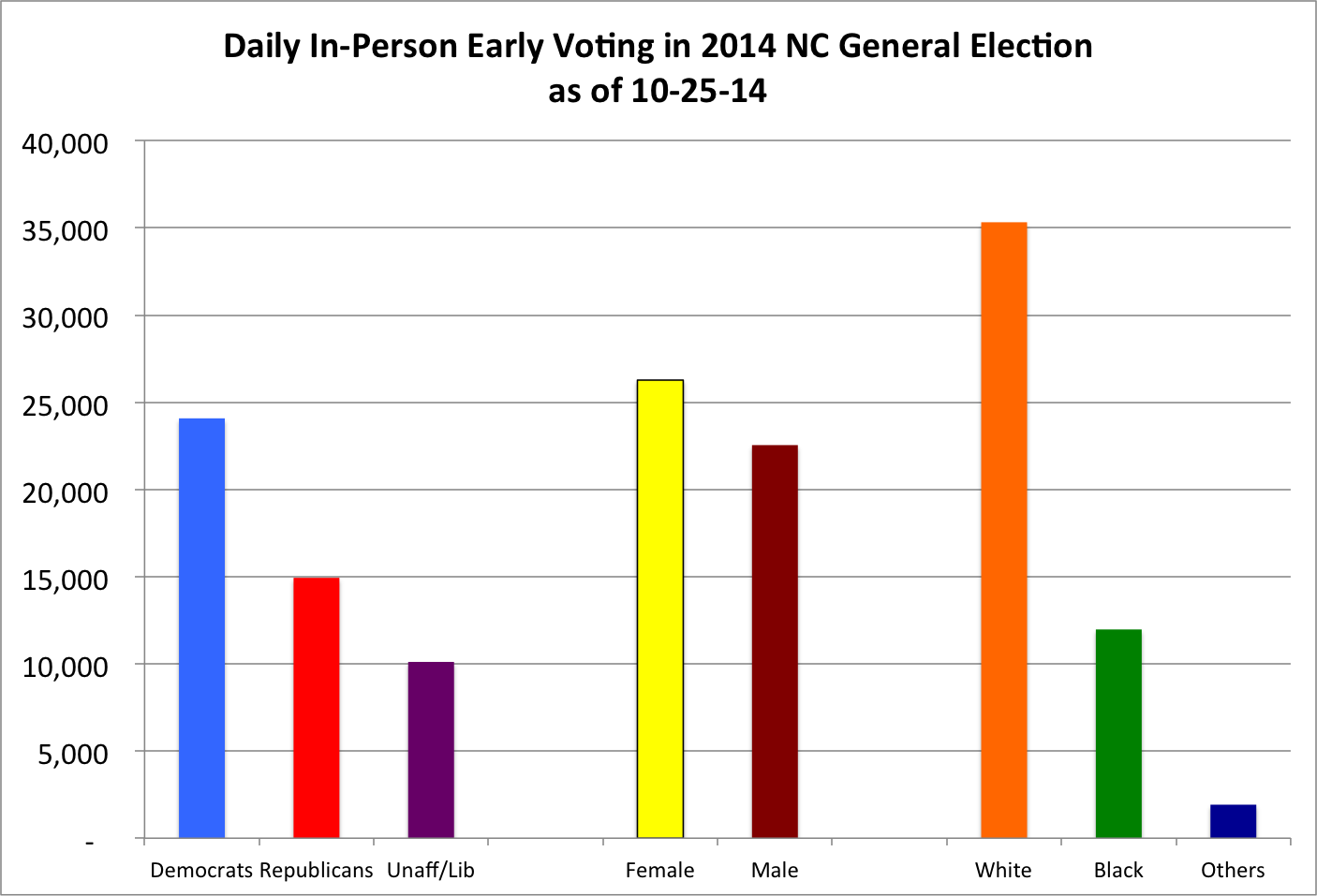 Among the cumulative three-day total of 283,253 ballots accepted as in-person early votes: 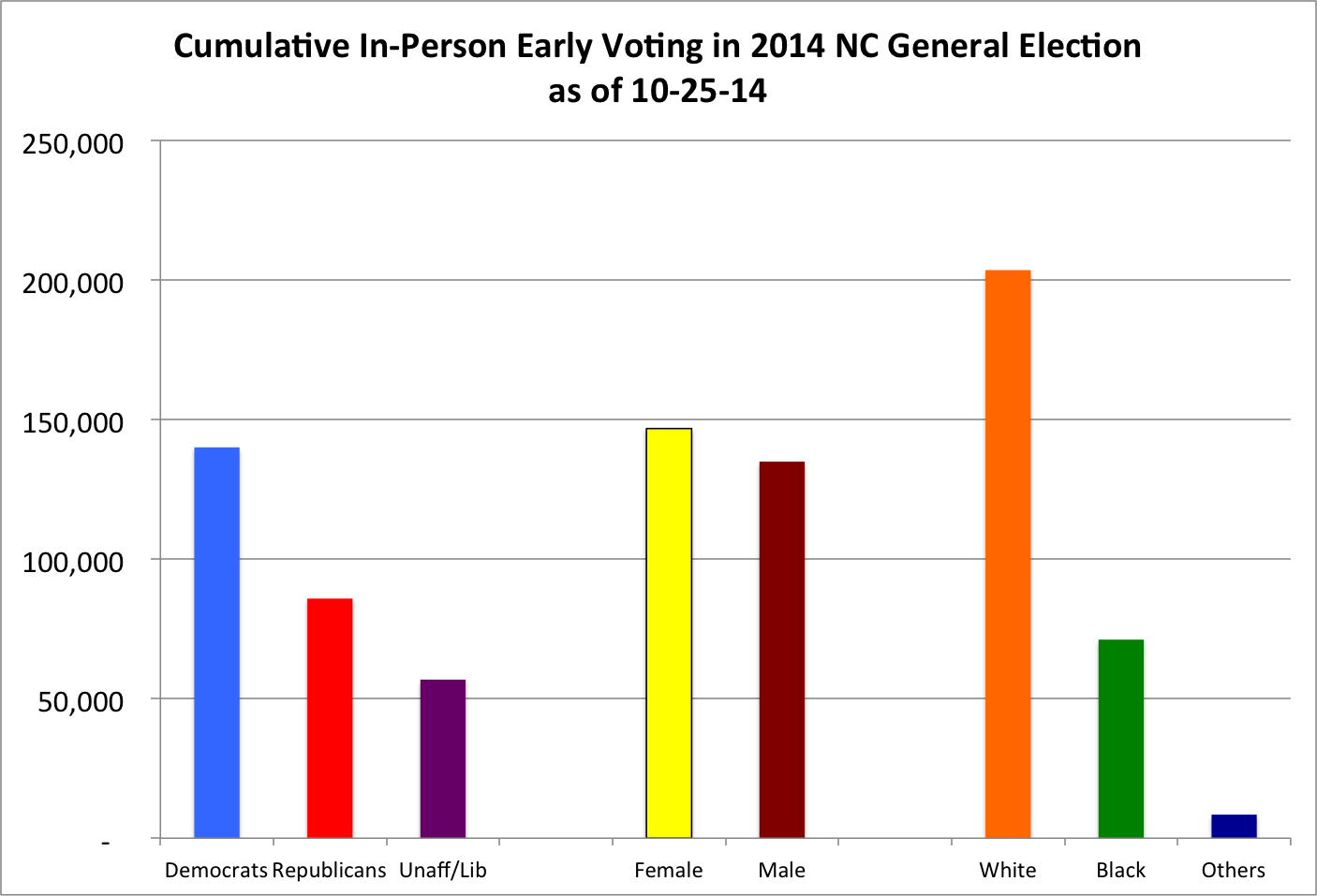 The Democrats are getting out.  That doesn’t necessarily mean good news for Hagan.  In the 2008 general election in Mecklenburg County, for instance, many precincts went for Democrats Obama and Hagan, but then Republican Pat McCrory for governor.  Democrats — and Republicans — can have a tendency to cross over in general elections.

How does this square with 2010 — the last election labeled as a Republican wave? : 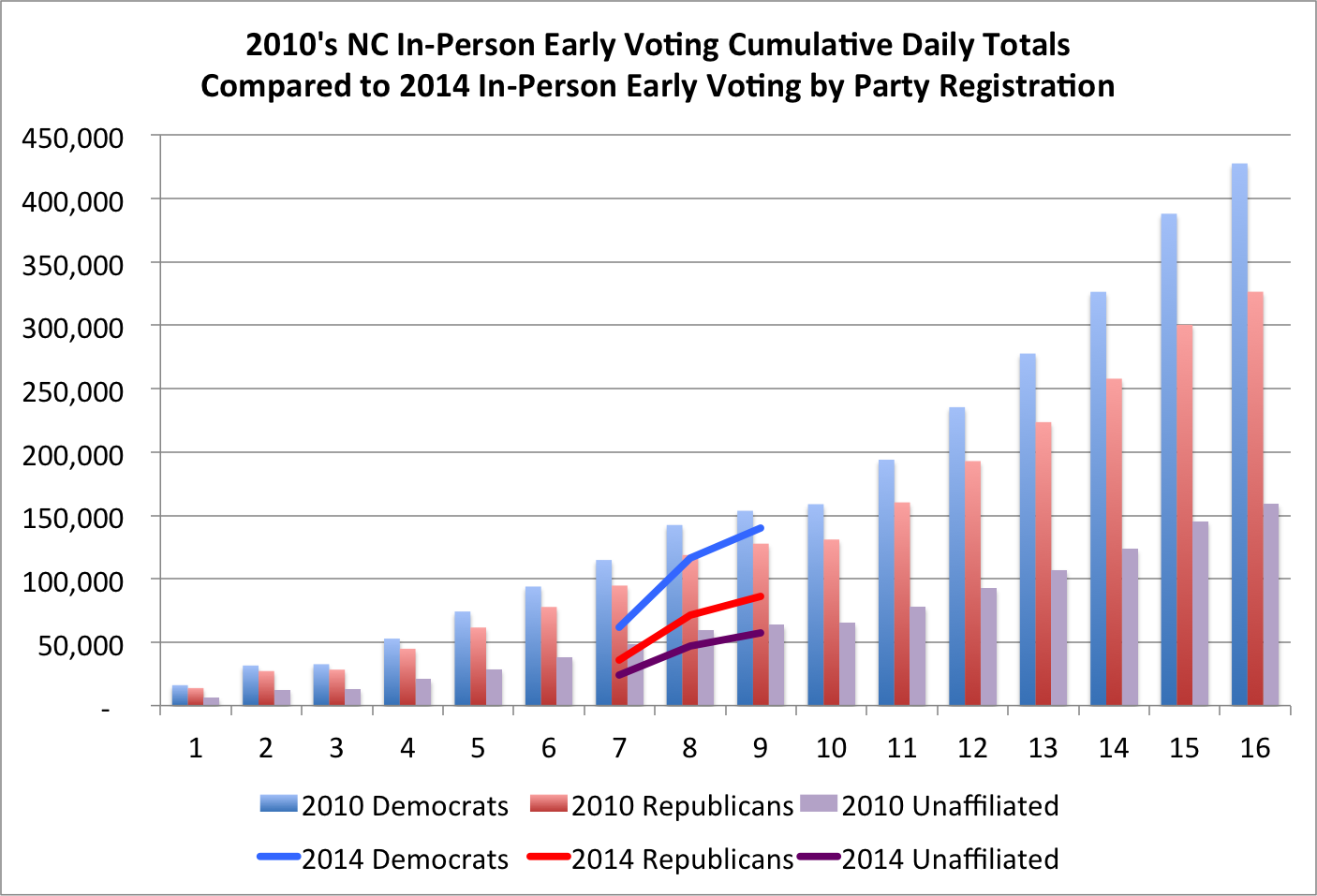 As of this same day prior to election day, 2014’s in-person early vote total is 82 percent of where 2010 was on the same day–but a reminder, there were 7 extra days of in-person early voting in 2010. Both Democrats and unaffiliated voters are 91 and 90 percent (respectively) of their 2010 daily cumulative total at this point, while Republicans are 67 percent of their 2010 daily cumulative total as of this same date.

Of these voters who have cast ballots via in-person early voting as of 10-25-14 and how they voted (if they did) in 2010’s mid-term election: 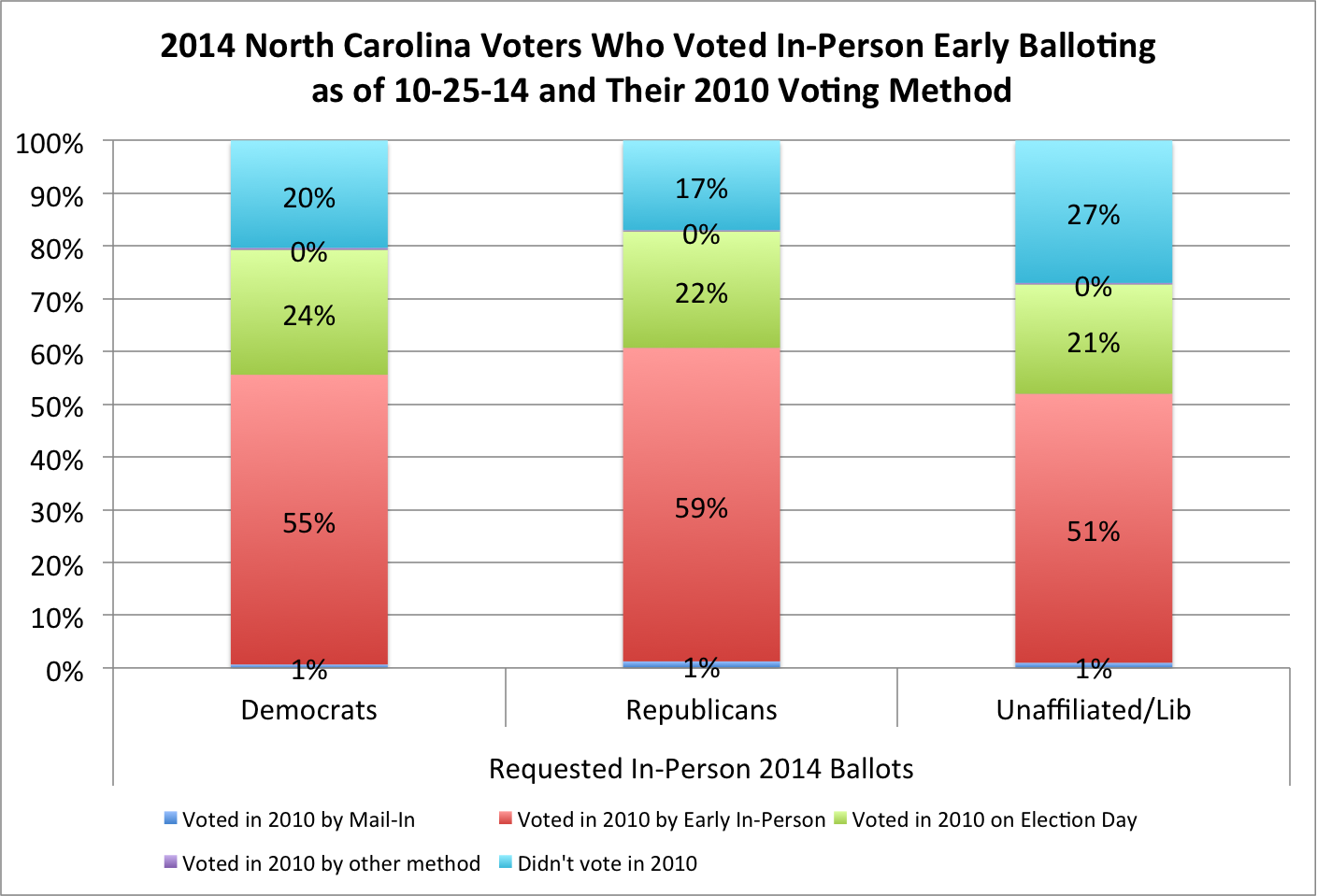