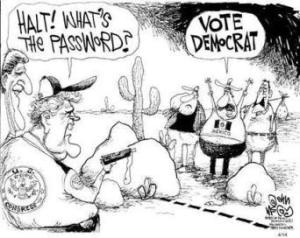 NCFire — an anti-amnesty activist group — uncovered evidence suggesting that up to 10,000 illegal aliens had North Carolina driver licenses and were registered to vote. NCFire reportedly received feedback that the state board of elections did not have the manpower to thoroughly investigate the issue prior to early voting beginning.

THAT didn’t stop the state board of elections from issuing a press release on Friday saying that their audit was complete and that ONLY 1,425 people had been found and disqualified.

Well, it appears that the folks at the Voter Integrity Project — on the front lines in the fight against vote fraud — are not buying it:

Stunning numbers from Friday’s Washington Post and VIP’s own research raise some serious doubts about SBoE reassurances that only 1,425 non-US citizens are registered to vote in NC. We estimate the number to be at least 10,000 and the Post pegged it around 17,900.

Urging “no cause for alarm,” Rep Harry Warren issued a detailed email to his colleagues, intended to bring closure to a media storm, created after James Johnson of the immigration-watchdog group, NC Fire discovered a large number of non-US citizens who are registered to vote in North Carolina.

We got a copy of an email that VIP’s Jay DeLancey sent to Rep. Warren in response:

Dear Rep Warren,
We appreciate your excellent summation of last week’s non-US citizen fire storm; but you made only
a vague reference to their research into 10,000 “legacy records” without describing the actual sort
criteria they used. We have a concern.
–
It’s related to legacy voters and it should yield thousands more names of non-citizen voters. I hope
we can all remember the days in late 2005 and January 2006 when the NC DMV offices were
suspiciously flooded with DL applicants who were seeking driver’s licenses before proof of citizenship
was required. The N&O even covered the story! I was told by a Charlotte-area resident that one TV
station aired a news account showing vans arriving from Atlanta that were packed with people getting
a driver’s license before the 1 Feb deadline.
–
In 2012, the Voter Integrity Project found 532 people who were disqualified from Wake County jury
duty because of their immigration status but were registered voters. Of those, 130 had actuall voted
before getting DQ’d, suggesting a felony, but the highly partisan Wake County BOE rejected all but
18 of our claims after Veronica Degraffenreid testified, “DMV said they were citizens.” I asked her
about the (above) 2005-06 scenario and she just shrugged her shoulders. Their sweeping
assumption was that if the voter didn’t have an LP license, then they were US citizens. This means
500+ people lied their way out of Lorrin Freeman’s jury-screening process; but Lorrin testified that she
required proof before she disqualified a potential juror. We lost the battle for lack of lawyers, but the
war is ongoing. With only a sample from one county, over a three-year period, we know that 532 is

only one tip of one iceberg. Since then, we’ve always wondered how may pre-LP licensees are
voting. We even asked Kim that question during one of our earliest meetings with her. She may have
initiated it as part of the “legacy” research you mentioned in your report, but last week’s fire drill
impels me to restate the question very clearly and urgently.
–
So, we need to be sure this search criteria was used:
1-DMV sort for all NCDL holders who obtained licenses before 2006
2-DMV sort among that population for ones whose licenses were expired and not renewed
3-DMV / DHS remove any who are listed by DHS as being deceased, handing BOE a list of citizens
who either moved away or non citizens unable to renew.
4-BOE sort to match any who are on the voter rolls
5-BOE crosscheck the names on the SAVE system to determine their status
Given our very limited sample from Wake county, I would be stunned if you found LESS than 10,000
such voters statewide and that’s enough to sway every election next week!

Could you please ensure that this precise search is (or was) conducted?

Here’s the Washington Post article that has DeLancey and others so concerned.  Here’s more from VIP:

[…] The writers, Jesse Richman and David Earnest (hawking their $19.95 full report here) matter-of-factly said around 6.4% of America’s non-citizen population voted in the 2008 election. It was a breezy article, without much methodology; but they ran enough numbers to spill the beans. . . since the President only needed 5.1% of North Carolina’s estimated non-citizen population to vote in order for him to win.

In math, their article equated NC’s 14,177-vote margin in the 2008 Presidential election to 5.1% of the state’s non-citizen population. Applying simple algebra, they estimated a total NC non-citizen population of 277,980. So, if the 6.4% national average held steady in NC, then 17,790 non-US citizens voted. If I lost you, please try the next paragraph instead.

In English, the Washington Post estimates around 18,000 non-US citizens probably voted in NC in 2008. And, oh by the way, they subtly mentioned in the fifth paragraph, that two elections were close enough to be affected by non-US citizen voters that year: Minnesota’s Senate (won by 312 votes) and North Carolina’s President (won by 14,177 votes). They concluded that both races were determined by non-citizen voters, since (they also reported) that group overwhelmingly votes Democrat.

But. . . as scandal-ridden politicians love to say, “that’s old news.”

The future is what mostly concerns the public; so we challenge Governor McCrory on this: It is within his purview to get to the truth. He should launch a full-scale investigation that will include a mash up between the voter rolls and several state agency data sets to see how many non-citizen voters can be found. Using records from DMV, Corrections, Education, Courts and a handful of other state agencies, the truth is buried in his own back yard. . .  but it will take courage to dig it up.