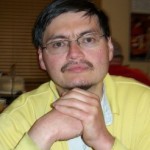 Who IS Alex Bradshaw?  Politicos from Murphy to Manteo are asking this question.  He hasn’t been appearing at candidate forums.  He doesn’t appear to have a formal campaign organization.  I can’t find a web site.  Though, he does have a Facebook page and a couple of online third party profiles.

Despite his low profile, Bradshaw is performing relatively well in the polls for the GOP primary.  PPP’s March survey had Bradshaw pulling down 6 percent of the vote — just ONE percent behind the high-profile, professionally-managed campaign of Charlotte pastor Mark Harris. He pulls 4 percent in WRAL’s March 20 poll — just TWO points behind Harris.  He draws 2 percent in Civitas’ March 24 poll to Harris’ NINE percent.   (PPP’s margin-of-error was in the 2 to 3 percent range, while WRAL and Civitas had an MOE in the 5 percent range.)

One particular elected official —  a big fan of our site who spends a good chunk of time in Raleigh — was talking with me recently about Bradshaw and the primary:

“How is this guy doing this?  He doesn’t appear to ever leave little Icard.  I talked to some party people from his neck of the woods, and most all of them have never heard of him.”

It’s an old political trick to stick someone in a race who has a name similar to your opponent’s name.  Let’s say your opponent’s name is Smythe.  You could find someone else named SMITH to file for the same race.  Your candidate’s name is likely to appear just above your opponent’s name — very likely to make mischief and reap plenty of confusion among low-info voters and senior citizens who may be inclined to vote for your main opponent (Smythe).  I’ve seen this done in several elections — accomplishing its mission in most cases.

To add to the conspiracy theory — check out this sample ballot .  This year, candidates are to be listed in reverse alphabetical order.  Thom Tillis’ name gets put at the top of the list.  Bradshaw, Brannon, and Alexander are at the end of the candidate list.  The sample ballot has everyone in proper reverse alphabetical order — except Brannon and Bradshaw.  Bradshaw appears right before Brannon. (His name should be just below Brannon’s, between Brannon and Alexander.)

Then, again, Bradshaw may have thought this idea up all on his own.  But it IS very likely that a lot of his polling has its origins in people confusing him with Greg Brannon.