For all of you who argue we need to stick with every R through thick and thin, we submit one Richard Mauze Burr as Exhibit A in our rebuttal argument:

Senators voted Wednesday to block President Trump’s $15.4 billion spending cuts package, with lawmakers saying it trimmed the budget too much.

Brushing aside administration promises that the cuts were chiefly to money that was never going to be spent, the Senate voted 50-48 to keep the bill bottled up. Two Republicans — Susan Collins of Maine and Richard Burr of North Carolina — joined Democrats to defeat the package.[…]

M’kay.  Show of hands.  How many people voted to send this clown back to DC to BLOCK cuts to federal spending?

[…] The vote was a blow to Republicans who had promised more fiscal responsibility after passing a $1.5 trillion tax cut last year followed by a $1.3 trillion spending bill in March. 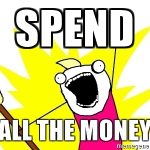 Mr. Trump, stung by criticism after signing the spending bill, vowed to return with cuts.

But with Congress already working on the 2019 spending bills, Democrats said any moves to lower government funding would sour the chances for bipartisan cooperation.

THIS — and the record spending on Jones Street — is what spawns “problems” for the establishment like The Constitution Party.
Why should we continue to stand with and by elected Republicans when they REFUSE to stand with or by US?