Homeschooling and charter schools are growing in popularity in North Carolina.  THAT has leftists gnashing their teeth furiously.  *It MUST be racism! It MUST be Trump’s fault!*

It may have more to do with the fact that a good ol’ education AIN’T what it used to be.  Nowadays, the education establishment appears to think American history began in the 1960s with the Vietnam and Civil Rights protests.  Students these days are woefully ignorant on the details of The American Revolution and even The War Between The States. Shockingly, more and more students are drawing a blank on the details around 9-11.

A Fayetteville “American history” teacher has been suspended after he illustrated a lesson on the Supreme Court’s Texas v. Johnson ruling on flag desecration by stomping on a flag in front of a classroom full of kids.

English class used to be about conjugating verbs, reading Shakespeare, and analyzing the works of Mark Twain or F. Scott Fitzgerald or J.D. Salinger or John Steinbeck.  Now it’s apparently about comparing Donald Trump to Hitler:

Audio of the lesson in question was captured by a student or students unknown attending Cedar Ridge High School in the Orange county school district.

*Gosh. Something kooky and leftist going down in Orange County?  SH-O-CK-ER.*   MORE: 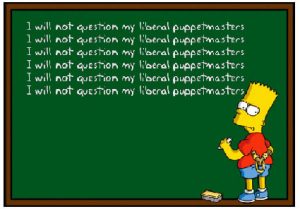 It is unknown why political parties and current political figures were used for the lesson instead of classical literary references or even Aristotle’s own works.

Harder’s personal website has a section on her ‘educational philosophy’. The section, in part, states that teaching is an “active process” and is “communal”.  Harder’s philosophy also says that, “a classroom should be a safe environment for all.”.

The audio was obtained by this site after the students had allegedly endured multiple lessons of the same nature. Allegedly, the class had previously been comparing speeches made by Adolf Hitler to that of Presidential candidate Donald Trump.

Some of the comments made by the teacher, Amanda Harder, were sent along with the full transcript to both the Principal of Cedar Ridge High and to the Orange county school board.

This site reached out to the Principal of the school for comment, however none was forthcoming. The Communications Director for Orange county schools, Seth Stephens, issued the following statement:

“We certainly have a policy that acknowledges that political literature or items of a political nature can be used for instructional purposes, but in no way should a teacher use any sort of political materials that are ‘pro’ or demean an political party or political position — there’s no place for that in the classroom. There just isn’t.”

The Orange county school board did not respond for comment.

Since reaching out to the school for comment, sources tell this site that Ms. Harder has now begun collecting student cell phones at the beginning of class.

It’s worth noting Harder’s personal website mentions technology use. The section includes a statement on cell phones with an ironic misspelling.

“I do not want to confescate phones, but I will if they become a distraction to instruction.”

In this case, the cell phone has arguably gone from a distraction to an instrument of instruction.