Charlotte is a global banking center.  High Point has a globally-renowned furniture market.  Pinehurst has a world-renowned reputation for golf.  Orange County — aside from the college basketball team in Chapel Hill — has developed quite the reputation for leftist moonbattery, kookery and fruitcakiness.

You’re more likely to find Bigfoot, leprechauns, dinosaurs, or pots of gold than an actual Republican within the county’s borders.   They’ve got a state legislator who publicly lamented his “whiteness.”    We’ve just heard about an English teacher there who has actually devoted class time to detailed comparisons between Hitler and Donald Trump.   And then there was the third grade teacher who read his kids a graphic, gay-themed, um, “fairy” tale.  And there was, of course, the “collective response to Anti-Blackness.”   We also heard from Orange County Commissioner — and renowned ACC basketball writer — Barry Jacobs announcing that “it’s very American to be prejudiced.”

Well, Jacobs is back with a vengeance defending the county’s ban on drive-thru windows:

Orange County Commissioner Barry Jacobs says the county has a duty to help Americans lose weight and to reduce greenhouse gas emissions, so he wants to preserve a drive-thru business window ban. Other commissioners say the prohibition is anti-business, and a lawyer for a national law firm fighting for economic liberty agrees.[…]

*Hey, just think about all the methane gas the products dispensed through those windows adds to the environment!*  MORE:

[…]  “More than a third of Americans are obese, and nearly half of them including me are overweight,” Jacobs said at the county commissioners’ quarterly public hearing Sept. 12 at which land use plans for the Hillsborough Economic Development District were discussed. “And so every time you just make it easier to stay in a car you’re not helping.”

“I think it’s an overly limiting restriction on economic development. I think there’s a lot higher priorities to reduce our carbon footprint, like getting students on buses, for example. So I would be open to removing that prohibition,” Dorosin said.[…]

Jacobs goes on to reveal the real motive at work here: 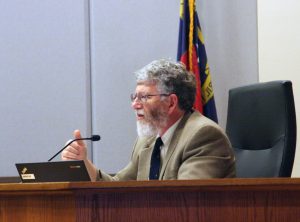 […] Jacobs said granting exceptions on a case-by-case would be preferable to eliminating the restriction.

“I actually like the idea of leaving [the prohibition] in, and having people come to us and request having a drive-thru,” Rich said. “People not getting out of their car just defeats the purpose” of attempts to reduce the county’s carbon footprint, and increase personal health.[…]

Mmm-kay.  So, it sounds like Barry and the gang really and truly enjoy having control over people and their resources.  Setting up a situation where people have to come beg you for exceptions is just inviting abuses and corruption.  Here’s the real moral of this story:

Several cities in Canada and the United States have imposed limits on drive-thru facilities, citing a host of reasons, including cutting carbon emissions, reducing obesity, and encouraging more bicycle and pedestrian traffic in central business districts.

“It’s not the government’s job to tell you that you need to walk further, or be healthier. They’re not your parent,” Pearson said. […]