During my time in the driveby media and while doing this blogging thing, I have developed relationships with several — some big, some not-so — political campaign consulting professionals.  More than one has told me in recent months and years that they don’t even bother commissioning polls for their candidates.  More than one has told me that — in this age of caller-ID, homes with unlisted numbers and those which are cell-only, and a general distrust of strangers over the phone– polling rarely if ever gives you any useful information.

A recent example?  Look at 2014’s US Senate race in North Carolina.  In the home stretch of that race, there was a grand total of ONE poll that had Thom Tillis leading Kay Hagan.   A little more distant example?  The Jesse Helms Senate races.  It was rare to find a poll that showed him leading.  But the man kept winning.  He got 30 years in DC.  One polling company — Long Polling of Greensboro — always managed to stand alone as the only one to correctly pick his races.

This year, polling is ALL OVER the place.  Pick any given poll, or any given day, and you can find a poll that makes one campaign or another feel really good.  One poll will have Roy Cooper up by eight, and another released on the same day will show the governor’s race TIED.  How does that happen?

Wording of the questions matters.  The sample size matters. The geographic location of those called matters.  The timing matters — before or after debates, certain news stories — matters.  So do things like the margin of error and the undecided numbers. 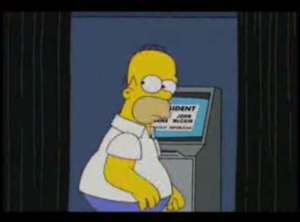 Let’s say Candidate A has a 48-44 lead over Candidate B.  There are 8% undecided.  The margin of error is +-4.2%.   Now, does A have reason to celebrate a four point lead, or do we have a potential nail-biter?  If Candidate B lands six to seven percent of those undecideds — and they actually show up to vote —  he’s WON.  The MoE shows that the spread could be 4.2% larger or smaller than it currently shows.  So, we could really have a TIE or an eight point lead for A.

An awful lot of the polling we’re seeing this go-around falls into that scenario.  Cooper up by 1, or Hillary up by 2, or McCrory up by 1 really doesn’t mean anything without understanding the rest of it.

Selzer & Company just released a poll for Bloomberg.  (They earn an A+ for credibility from the fivethirtyeight website.)   They quizzed 805 likely voters between Sept. 29 and Oct. 2 and had an MoE of +-3.5%.  They show Hillary leading Trump 44-43 with 7 percent Undecided.  THAT can arguably be labeled a TIE — an up for grabs scenario.  The MoE is bigger than the spread between the two candidates.  The undecided total is larger than the spread between the candidates.

They also looked at the Senate race — finding Deborah Ross leading Richard Burr 46-44 with nine percent undecided or uncommitted.  The MoE is larger than the spread between the two candidates.  The MoE tells us that we could have a 5.5% Ross lead here, or a 1.5% Burr lead.   The undecided / uncommitted number is also larger than the spread between the candidates.  So, we also arguably have a TIE — an up for grabs scenario — here as well.

The poll also examined the governor’s race — finding Roy Cooper with a 50-44 lead over Pat McCrory with five percent undecided or uncommitted.  With these numbers, McCrory would still fall short if he landed ALL of the undecided / uncommitteds.  With the margin of error, Cooper could really have a lead of 9.5% or 2.5%.  The findings in this race bode worse for the GOP candidate than they do in the other two races.

Public Policy Polling also put out a recent poll on the Big Three in NC.  I know, they are a bunch of liberal jerks.  (Remember, Deez Nuts?)   FiveThirtyEight gives them a B+ for credibility.

They get silly — for PR purposes in all likelihood — early in the election cycle.  But their numbers tend to look much better the closer you get to election day.  They weren’t too far off  the final mark in 2014 or 2012.  (Actually, their numbers for the Democrat candidate always tend to be much more accurate.)

They quizzed 861 likely voters between September 27 and 28 with a margin of error of 3.8%.   For President, they have Hillary leading Trump 44-42 with 7 going to Johnson and 7 undecided.  Johnson WILL NOT end up with anywhere close to 7 percent. And some segment of that 7 percent undecided will eventually be distributed between Clinton and Trump.  The MoE is 3.3% and the spread is 2%. So, again, as with the  Bloomberg poll, we have an up-for-grabs scenario in this race.

In the Senate race. Burr leads Ross 41-39 with 14% undecided.   If you take that Undecided vote, and consider it with the 3.3% margin of error, we have another up-for-grabs race.

In the governor’s race, the Cooper campaign can’t take as much comfort in these findings as they could in the Bloomberg poll.   PPP has Cooper leading McCrory 45-42 with 9 percent undecided.   Those undecided — at least a portion of them — will go somewhere by the time election day rolls around.  A third of them showing up at the polls can make a huge difference one way or another.  Consider the Cooper margin in light of the 3.3% margin of error, and we have another up-for-grabs race.

So, the lesson here?  Don’t just accept the A vs. B numbers in all of these polls.  Drill down and check out the Undecided number and the margin of error.  Those tell you a lot more about that poll