Well, the primary race in the 9th is getting quite nasty.  Team Rouco is bashing Pittenger mercilessly on his ethics troubles AND his vote for that obscene Omnibus spending package.    One of the more interesting developments has been the prominent presence of Tillis political operatives on social media aiding and abetting the tearing of Pittenger a NEW ONE. 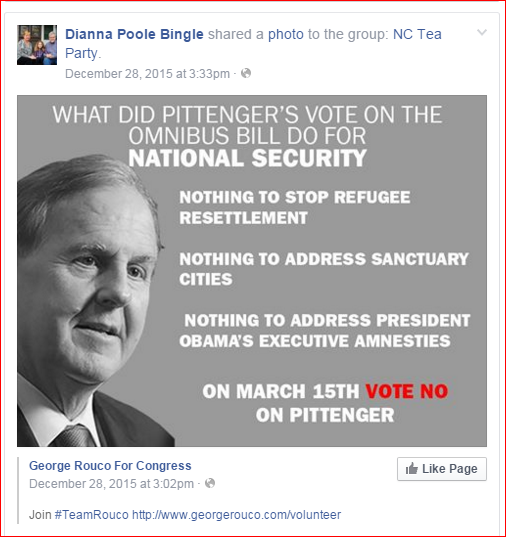 Mrs. Bingle is widely-known and regarded as Susan (Mrs. Thom) Tillis’s political consigliere. Her right-hand gal.   The problem here?  Thom The Therrible voted the same way on the same bill over on the Senate side!

And then there is this guy: 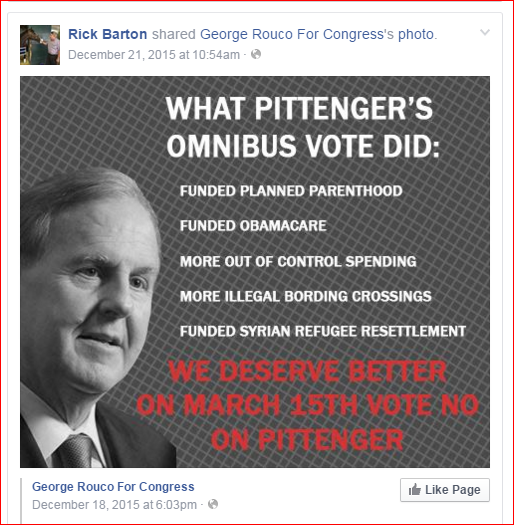 Mr. Barton was a regular fixture in our site’s comments section during the 2014 senatorial race.  He was a passionate defender of Thom Tillis — rising to the man’s defense every time we raised ethical issues or position / vote inconsistencies.  Again, Thom The Therrible voted the same way on the same bill as Pittenger.  Where is the anger at Thom? Interesting.

This site is wholeheartedly behind any effort to get Robert Pittenger out of government.  But is it truly beneficial for the district to replace damaged goods with not-yet-but-possibly-soon-to-be-damaged goods?

I hope Rouco is the real deal and will walk the walk in addition to talking the talk.  But judging by the crowd gathering around him, this looks a lot more like cutting losses before Pittenger’s mess blows up on the rest of the local political establishment.