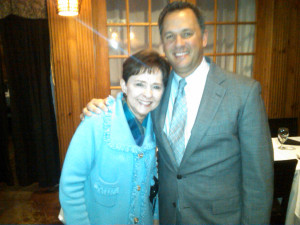 Sue Myrick has had a long, distinguished political career. She’s been mayor of Charlotte.  She’s served the Charlotte area in Congress.  Her son, Dan Forest, got himself elected Lt. Governor of North Carolina in 2012 — making mama very proud, we’re sure.

Now out of office, Myrick is stepping back into the spotlight and likely giving her son a wee bit of a headache.  She has formally endorsed George Rouco’s primary challenge to incumbent US Rep. Robert Pittenger — who is reportedly facing IRS and FBI inquiries into his private business dealings.  Myrick’s son, Forest, has campaigned with and for Pittenger in the past.  They are both Republicans standing for reelection this year.

that Rouco is a stalking horse for Charlotte GOPe types who want Pittenger off the stage and out of the spotlight before his “problems” blow back on them.

But Myrick MAY be an exception to that rule.  Pittenger now holds the seat Myrick held from 1995-2013.  When the seat was open, Myrick supported Jim Pendergraph — who ended up losing to Pittenger in a bitter primary runoff election.  This is the first credible primary challenge Pittenger has had since taking office — and Myrick is likely taking the opportunity to get in some licks against her old nemesis.