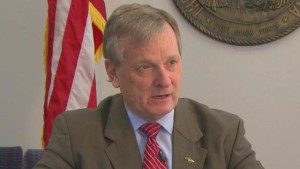 “We’re speeding down the road at 100 miles per hour right for a $30 to $40 billion dollar wall,” said Dale Folwell, currently the only GOP candidate for the state treasurer position being vacated by Democrat Janet Cowell. “Raleigh has been kicking the can down the road for so many years that time is about to run out.  If something isn’t done now, the people of North Carolina are going to get hit with a nasty multi-multi-billion dollar surprise.  I can’t stand by and let that happen.  That’s not the way I roll.”

Folwell is talking about the state employee health plan managed by the treasurer’s office. (He hasn’t even factored in the unfunded mandates tied to the pension plan.)  To put all of this in perspective:  The state budget the General Assembly just passed totaled $21.7 billion.

Imagine adding $30 to $40 billion in obligations — just related to health care alone for state employees — to that.

Folwell, a former Republican legislator from Forsyth County, has developed a reputation over the years as someone who can tackle a challenging scenario, pull it apart, examine its components, and come up with a creative, innovative solution that puts it all back on the right track.  Those skills were honed and perfected in his past professions as a motorcycle mechan 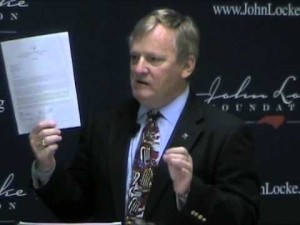 ic and a forensic accountant.

“Think in terms of bowling,” Folwell said. “When you bowl, you try to take down as many pins as you can in the most efficient way possible. With one ball hopefully.  Quite a few folks in government wouldn’t mind throwing as many balls as possible at those ten pins.”

In the legislature, Folwell had some real success under Democrat and Republican majorities and administrations.  He led the fight to create vertical driver licenses for under-21 drivers, in response to store clerk complaints about being able to detect fake IDs in cigarette and beer purchases.  Folwell also led the fight to change the policy regarding drivers without insurance. 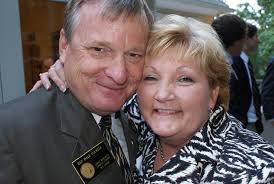 “Ever see cars with no tags out and about?,”  Folwell said. “We used to just hit drivers with little tickets and let them go on.  Now, we take their license tags. That tends to get people’s attention about obtaining proper insurance.”

Folwell also pushed for redesigned dealer tags that can be read much easier by law enforcement officers in moving vehicles.  Folwell said there had been a persisent problem with some people keeping dealer tags on their cars  FOR YEARS.

“We buckled down and got rid of three billion in debt,” said Folwell. “We also produced a billion dollar surplus and paved the way for $600 million in tax relief for North Carolina businesses.  How many government agency heads can tout an accomplishment like that?”

Folwell has long been frustrated with state government’s efficiences — and lack thereof — as well as its relations with the taxpayers.

“The state had been giving business  people fourteen days to respond when a terminated employee files a claim for unemployment,” Folwell said. “But the state was going 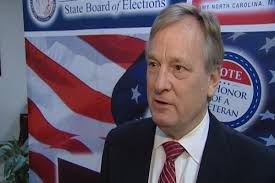 ahead and paying these people within six days of filing for unemployment.  What’s the point of even involving the business owners if you’e going to do that?  I fought to make sure business owners got a say before the first dollar went out to a claimant.”

(He said his agency made some exceptions in large-scale, unexpected cases like the House of Raeford and Miller Coors closures and layoffs.)

”For a long time, you could go into the office, tell them you’re anybody, and get a claim going,” said Folwell. “Then, we came across some interesting info from a court document.  It detailed some texts between two roommates, where one was apologizing to another for stealing their social security number to go file for unemployment.”

Folwell said that development inspired him to seek some changes.  He initially took some heat for demanding that applicants produce photo identification.

“I got asked where I got my justification for this,” said Folwell. “I told them: Our President. They looked at me in stunned silence, so I clarified it for them.  The Obama administration’s Department of Homeland Security has an I-9 form that you are required to fill out in order to get hired for a job.  It requires a photo ID.  My take on the situation was this: If a photo ID is a requirement for employment, it should also be for receiving unemployment benefits.”

This guy sounds like someone we need to help in March and November.