Elections have been challenged time and time again throughout American history.  The most recent?  2000, Gore v. Bush.    John Kerry has recently been musing about how Bush stole 2004 from him.

Yet, with all of the stories out there to cover — Dallas’s brother and his friends inciting violence at Trump events, The Clinton Foundation, pay-to-play, local governments having to go private to work around Roy Cooper’s crime lab — Colon Campbell can only find (1) the perpetual search for genitalia, and (2) Hillary Clinton talking points: 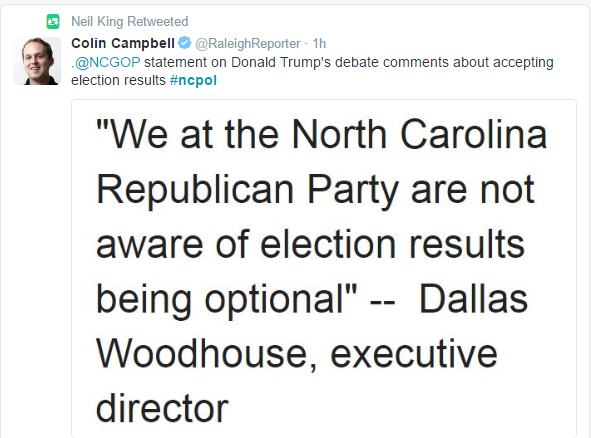 Of course, Dallas makes it worse by playing into this dingleberry’s hands.  Trump DID NOT SAY ELECTION RESULTS ARE OPTIONAL. He has made the case that monkey

business is going on, and — if he sees it in the election returns — he may very well do something about it.   Hillary partisans are trying to make it sound authoritarian of Trump to not give Hillary a hug after he – -in their view — gets smoked on Election Day.

Donald Trump is a private businessman with no influence over the military or the rest of the national security apparatus.   In 2000 , we had the sitting VP of the US declining to concede the election and step down.  Next in line to the presidency.  (THAT was scary.  THAT was authoritarian. )

I hope Colon enjoys working for Univision.  (Maybe his new jefe will make him finally tell the truth about HB2.)

I hope the GOPe types in Raleigh appreciate the utter mess Dallas has made since he was foisted on the party.  I am certainly not going to enjoy living in this state or country if Colon and his buddies get their way.