I never thought I’d see the Democrat Party actually be able to get to the right of Republicans on taxes.  But state Democrats are doing that to GOP legislators AND the state’s GOP governor right here in the waning days of tax season.

How did we get here?  Well, the Republican majority, with SOME Democrat help,  passed a bill offering a slight temporary decrease in the gas tax, followed by years of gradual increases.  For years, Republicans have been able to campaign on the promise that they would let US keep more of our own money to use as we see fit.  Can’t do that this time. (At least, honestly.)

Now comes word that the GOP majority has retroactively cancelled out some tax deductions:

Some North Carolina taxpayers will have to amend their 2014 state tax return or scramble to make last-minute adjustments because of changes to the state’s tax code that went into effect March 31.

Senate Bill 20, which was signed into law by Gov. Pat McCrory, is known primarily as fuel tax legislation because it lowered the state’s gas tax by a half-cent to 36 cents a gallon on April 1 and to 35 cents on Jan. 1, 2016. 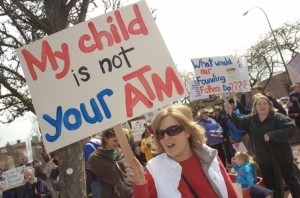 That change, along with a new formula that eventually will raise the gas tax, was grafted into the bill after it was introduced as a vehicle for adjusting the tax code.

Because the adjustments were made retroactive to the 2014 state tax season, individuals affected by the changes have until April 15 to amend their returns, which could result in giving back some of their refund or having to pay more in state taxes.

The state could charge interest or require a late-payment penalty on any additional state tax not paid by April 15.

It seems like just yesterday we had Republicans trying to rip Democrats a new one for tactics like these.  How are Republicans handling it all now?: 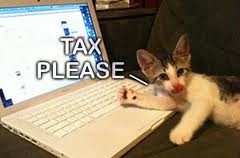 […] It’s the first deadline for most filers under new rules approved by the legislature and signed by McCrory in 2013. The changes have resulted in less tax being taken out of worker paychecks, but they’re also expected to generate smaller 2014 tax refunds and higher final payments for more filers.

Republicans like McCrory and lawmakers counter that most people are benefiting from the tax overhaul law, either by having more money in the wallets as income tax rates fell or through jobs created thanks to an improved business environment. The measure increased standard deductions, thus raising the threshold before income earners must pay taxes.

Whaaaaaaa …???  Let’s review.  Spending is going UP under the GOP majority on Jones Street.  Taxes, thanks to the governor AND Jones Street, on gas and income are going UP.  *SIGH*

Prior to 1980, there really wasn’t much difference nationally or statewide.  You had some people in the western part of the state whose families had been with the GOP since Lincoln.  But, ideologically, there wasn’t much difference between them and the Eastern North Carolina Democrats.  Nationally, you had Republicans pledging to be only 80 to 90 percent as awful as Democrats.  Dwight Eisenhower and Nelson Rockefeller were busy lambasting people calling for low taxes and smaller government — deriding them as extremist nuts.

Prior to Pat McCrory, we’d had TWO GOP governors who were not forced on us by the federal government.  Both of them were western NC Republicans who were not all that uncomfortable with a burgeoning bureaucracy. 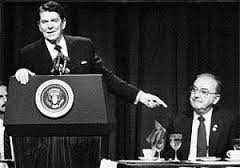 m 1932 until 1952 and from 1960-1968, Republicans sat in the political wilderness — embracing Nelson Rockefeller and big government and failing to understand why the voters wouldn’t give them a break.

In North Carolina, Republicans were locked out of the governor’s mansion for about a century — until George McGovern and a nasty internal NC Democrat Party fight propelled Jim Holshouser into the big house on Blount Street in 1972.

Ronald Reagan’s landslide victory, Jesse Helms’s fight with Jim Hunt, and another internal state Democrat spat, helped propel Jim Martin into the governor’s mansion in 1984.  Holshouser and Martin didn’t have a Republican majority like Gov. Pat has.  Therefore, they spent some frustrating years arguing with Jones Street or cutting really bad deals with those devils.

The real key to the GOP rise in this state was Eastern North Carolina’s come-to-Jesus moment with the GOP.  What made them so comfortable to vote Republican? The national Democrat move away from conservative values and the GOP’s embrace of things like family values, small government, low taxes, and a strong national defense.

The differences became crystal clear.  The Republicans were for average, hard-working, God-fearing working people.  The Democrats were the pointy-headed faculty lounge crowd, the radical race-baiters, and the welfare state parasites.   It was a winning formula. You would think the GOP would stick with it.

2 thoughts on “#ncpol: Blurring the lines. Surrendering while you’re ahead. (Trying to go back to the political wilderness?)”