[Outro]
I will get down rolling tonight
Nobody’s fault

*It’s a real profile in courage when you shift blame to someone else as soon as your decision begins to take some heat.*

You may not have heard but there are a lot of folks in North Mecklenburg County a wee bit upset with the proposed tolls and subcontracted management for their stretch of I-77.

Some local officials lost their jobs or came close to losing their jobs over the tholl road agreement.  And the blame game has begun:

The claims came after the Observer reported that much of the anger over the I-77 toll project has been directed toward McCrory, who has declined requests to cancel the contract.

A Cooper campaign spokesman said the contract “would not have been signed in the first place” if Cooper was governor. That drew a sharp response from Transportation Secretary Nick Tennyson.

“(The contract) was developed through meetings in which representatives from the Attorney General’s office were actively involved,” he said in a statement to the Observer. “They had the opportunity to raise objections or ask questions at any time since those conversations began in 2012.”

Noelle Talley, a spokeswoman for Cooper, said his office “did not negotiate or sign the agreement.”

“Attorneys with our office who reviewed the contract did so to determine if it’s legal, not whether it’s good policy,” she said.

That’s, um, rich. Here’s our take on where the blame for all this lies:

This all boils down to a good-ol’-boy, smoke-filled backroom deal that went horribly wrong for the people behind said deal.  There has been so much lying and so much arrogance by the powers-that-be.  Very little representation of the people’s wishes.

Former state Rep. Robert Brawley (R-Iredell), who was run out of office 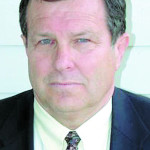 by Thillis and the gang for resisting the tholl roads and other assorted schemes, is gaining some traction in the governor’s race.   He’s promised to cancel the toll deal once he’s elected.  He’s also been quite critical of the governor’s team aiding CSX with a heavy-handed eminent domain deal in Johnston County.