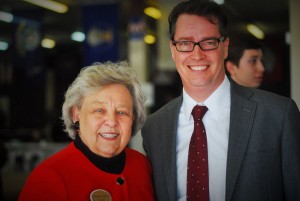 Sources tell me that members of the NCGOP Executive Committee were informed via email this morning that current state party chairman Claude Pope will not be seeking another term in office.

What happened with Pope?  One senior party source tells me:

“Claude was shown the door. The powers-that-be felt that Claude did not do nearly enough to tout McCrory and his agenda. Claude didn’t cheer loud enough for stuff like corporate welfare, raising the gas tax,  and expanding Medicaid.  So, in the eyes of some in Raleigh, he had to go.”

My inside sources tell me that Pope was pressured to leave thanks to a combined effort from McCrory, Lt. Gov. Dan Forest, Rep. Patrick McHenry, NCGOP vice-chairman Carolyn Justice, and various allies of those folks.

Here are some of the key tidbits from Dee Stewart’s release:

“As we head into the 2016 election cycle, the North Carolina Republican Party needs to be energized and organized like never before,” Collins said.  “As State Chairman, I will raise a tremendous amount of money for the Party and I’ll put together the best possible team to get in the trenches and build a powerhouse grassroots organization.  I am very excited to have Carolyn Justice, a conservative former legislator and talented Vice Chairman, teaming with me as we lead the way to victory.”

“We must energize and organize our Party like never before if we are to carry North Carolina for our Republican Presidential nominee, re-elect Senator Burr and keep Governor McCrory and Lt. Governor Forest at the helm of our state in 2016,” Collins remarked. […] 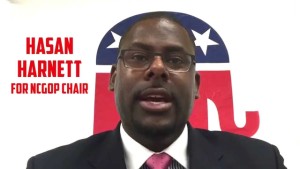 Some politically-active folks with long memories may remember Justice’s role as a junior state House member siding with Richard Morgan and Jim Black in their unholy alliance in 2003. Voters gave Republicans a slim majority in the state House, but backroom maneuvering by Morgan and a handful of allies threw control to the Democrats.  Justice prospered in the Democrat-controlled House, and even went as far as doing media interviews defending the Morgan-Black alliance.

Many political observers credit the Black-Morgan alliance in the House, and its mischief with redistricting, as a setback for the state  party that took roughly a decade to overcome.

There IS another candidate out there for consideration in the chairman’s race.   Hasan Harnett, a Cabarrus County-based activist, who has worked with the RNC in North Carolina on minority outreach, has thrown his hat in the ring for the chairman’s race.    Harnett also served as the 2014 campaign manager for 12th congressional district GOP nominee Vince Coakley.