Under the previous regime at NCGOP, we got complaints galore about meddling in Republican primaries by party staff.  The accusations even touched the then-party vice chairman.

We were promised things were going to be different with this new group.  Yet, we get articles like THIS where an incumbent legislator claims he got opposition research material on his GOP primary opponent from NCGOP staffers.  NCGOP HQ quickly put THIS out on Facebook: 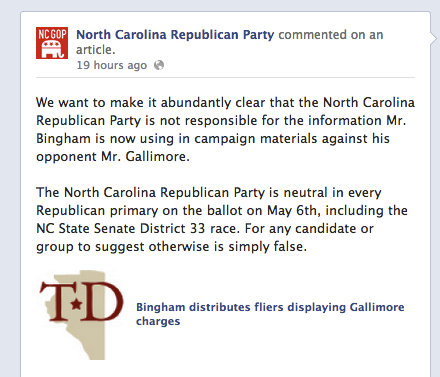 We recently got a report about Cabarrus County GOP leaders passing a resolution condemning two Republican candidates engaged in primaries in the county this year — one had attempted to form an independent challenge to Pat McCrory, and another has gone on record moaning about Tea Party “extremists.”   Well, it looks like NCGOP has now stepped into the matter with a heavy hand:

The Cabarrus County Republican Party retracted and apologized for a resolution its executive board passed on April 25 condemning two of the party’s candidates for “exhibiting actions that are not reflective of Republican Party values,” according to a statement issued by the local GOP Friday afternoon.

With a 16-1 vote, the board passed a resolution harshly criticizing Diane Honeycutt and Leigh Brown for what party leaders described as attempts “to benefit from the Republican brand and label.”

Brown is challenging incumbent Larry Pittman for the GOP nomination for N.C. House of Representatives District 82. The winner will face Democrat Earle Schecter in the November election.

Honeycutt is one of four GOP candidates challenging three GOP incumbents for three seats on the Cabarrus County Board of Commissioners.

Honeycutt said she made a formal complaint to the North Carolina Republican Party.

The state arm of the GOP reviewed the complaint and directed the local party to take action, said Todd Poole, executive director of the North Carolina Republican Party.

“The North Carolina Republican Party is neutral in every Republican primary on the ballot on May 6,” Poole said Friday. “Members of the state executive committee are not permitted to use their office to endorse candidates in a primary and the resolution that was passed last week directly violated our party rules.”

[…] Like you, I am ready for the primary season to be behind us so we can focus on beating Democrats this fall. This week has been consumed by internal struggles between campaigns and even our very own county party organizations. Many of you know about the resolution in Cabarrus County last Friday night that accused two candidates in a primary of
“exhibiting actions that are not reflective of Republican Party values.” I am pleased to report that the Cabarrus County GOP has retracted their resolution and apologized for the resolution. […]

Poole had emailed the linked PDF out to intended recipients.  We, of course, got a copy of that email with the pdf attached. One of those listed as a recipient was NCGOP staffer Greg Fornshell. He has a NCGOP email address, and is IDed on the NCGOP web site as an accounting assistant.  But Fornshell has also been IDed in media reports as the campaign treasurer for incumbent state Rep. Brian Brown of Greenville — who is currently involved in a primary race.  Wait.  I thought HQ was neutral in all primaries.  How can that be when a paid staffer at HQ is working as campaign treasurer for a Republican candidate involved in a primary?

Even more interesting is the fact that Poole’s campaign consulting firm — of which he is a founding partner — is representing a Republican state House candidate in Davidson County currently involved in a primary.

There is so much concern about Cabarrus County, but what about the activities of Fornshell in Pitt County and Poole’s firm in Davidson County?

5 thoughts on “NCGOP: Meddling in primaries? Who? Us?”