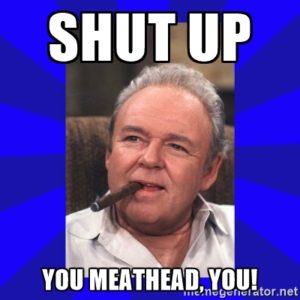 This weekend’s NCGOP convention is shaping up to make the WWE (or any episode of Maury) look like a Wednesday night prayer meeting in comparison.

NC $pin:  Remember the big fuss about the fees being charged delegates attending the affair?  It played a huge part in the ouster of Hasan Harnett from the chairman post. Defenders of the fee hike talked about needing to charge more in order to pay the bill for the venue and to have respectable food and drink for attendees.  But I hear that the party has pledged to pay a SWEEEEEET $um of ca$h to Tom Campbell to bring his NC Spin traveling sideshow to, um, “entertain” the delegates.  (From what I hear, THAT accounts for a significant chunk of the increase in fees.)

Hasan in tha’ House!   Back from his overseas ventures, recently-deposed chairman Hasan Harnett has announced plans to attend the NCGOP convention in Greensboro.  Meanwhile, some of his supporters plan to bring motions from the convention floor declaring the April 30 meeting to oust Harnett — and the election of Robin Hayes — to be a violation of party rules, out of order, and therefore invalid.   I understand they have some pretty good evidence supporting their claims.  Pro-Harnett forces say that

their take on Harnett’s ouster is in line with a ruling made by NCGOP officials in the Claude Pope regime regarding an attempted 2014 ouster of another NCGOP official.  Some also see similarities between the pro-Harnett position and state party officials’s ruling on an attempted ouster of the Haywood County chairman .

And speaking of Haywood County … :   Activists there filed a complaint with the state bar against NCGOP counsel Tom Stark over his alleged conduct in the effort to remove Hasan Harnett from his elected chairman’s position.  Now comes word, via social media, that Stark has responded with a cease-and-desist order against one of those activists, and a warning that the activist should stay away from NCGOP property and all NCGOP meetings and events.

And those RNC  delegates.  Lost in the hubbub of last Saturday was a behind-closed doors approval by ExCom members of a slate of delegates to represent the state party in Cleveland.  From what I am told, the convention delegates will be presented with the slate and an up-or-down voting option.  (The actual details of the names on that slate have been a closely guarded secret — much like most of the party’s internal operations these days.)

Oh, and Greg Gebhardt IS an employee of David Lewis.  His campaign for RNC committeeman is playing up his experience in the military and his “small business” (like Richard Hudson?) background.  Lost in the hype is Gebhardt’s role as a paid employee of Lewis on Jones Street and his role as Lewis’s reelection campaign chairman in March.  His only other announced opponent in the race is state Rep. Mark Brody — a solid conservative who regularly votes with people like Chris Millis, Larry Pittman, and Mike Speciale.  So, a vote for Gebhardt is a vote for MORE DAVID LEWIS.

6 thoughts on “#ncgop: All in the (dysfunctional) family”