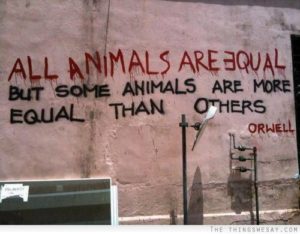 The late judge Robert Bork wrote a great book called “Slouching towards Gomorrah” that detailed the radical left’s work in the courtroom to demolish and remake western culture, morals, and civilization.  Judge Bork is gone, but the left is still here, working hard.  We’re no longer slouching in the direction of that notorious city.  We’re in a full-fledged sprint.

Concepts and cultural foundations that have long been accepted as common sense are now being tossed into the trash bin thanks to a lot of unelected folks in courtrooms. It all seemed to start with the concept of mom staying home to raise the kids while dad went to work.  We were told by the left that was inhumane and barbaric.  *Women should be allowed to drop the kids off at day care and go to work all day just like the guys.*

We got told marriage didn’t mean anything.  Be who you want to be with.  Have kids with whomever you want to have kids with.  An inconvenient pregnancy?  *Here, have an abortion.*

So, now we have a record number of kids growing up in single parent homes basically being raised by the department of social services and government subsidized daycare.  Very little parenting or moral structure involved.  There are all kinds of studies showing kids from these environments are more likely to be destined for a life of drugs, crime, and / or poverty and / or government dependency.  *Isn’t it great we dumped all that stuffy, bigoted morality?*

We got told women are NO DIFFERENT than men.  Let them go be beat cops, firefighters, and combat soldiers.  And if those ladies being put into those dangerous situations happen to be single mothers (with kids in daycare, of course) — and something bad happens — too bad, so sad. Feminism has triumphed.

Never mind that there are different physical fitness standards in the military and law enforcement for men and women.  Never mind that male police officers are regularly called in to back up female officers because they don’t have the physical strength to handle a suspect.

Just recently, we got pummeled as a state for daring to approve an amendment to our state constitution which said “marriage involves one man and one woman.”  Can you believe that we had to codify a piece of long-standing common sense like that?  But, hey, you have to get specific.  Law school grads managed to find a “right to abortion” in the Fourth Amendment.

On one hand, the left tells us marriage doesn’t matter.  Then, on the other hand, we’re told that it is so important that homosexuals need to be able do it too.

Now comes another chapter in this never-ending Orwellian tale.  The US Department of Justice, run by a woman blessed by both Thom Tillis AND Richard Burr, has declared it is discriminatory and a violation of the Civil rights act to say THIS is for men, and THIS is for women.  We apparently have until MONDAY to open all our bathrooms to ANYBODY who wants to use them or lose all kinds of federal funding.

Check out this video to see what happens when the feminists / college gals expressing solidarity with their GBFs and hairdressers on this law actually get what they’re demanding.

I’ve heard HB2 opponents question how we will enforce HB2.  My question for them is this:  If Obama and his pals win on this, how on earth will you disprove that I REALLY DO FEEL LIKE A WOMAN if I am discovered in the ladies room?

Will Pat McCrory follow his natural Vinroot-Myers Park – Republican instincts and throw HB2 and its supporters under the bus?  Or will he stand firm against this onslaught against common sense and the laws of nature?

The state has the option to go to federal court to have this nonsense blocked.  But our lawyer — attorney general Roy Cooper — appears to be too busy running for governor on our dime to actual 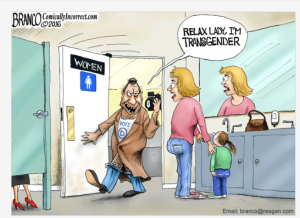 ly DO HIS JOB.

The US DOJ is really opening up a Pandora’s Box here.  Let’s say a company produces ”feminine hygiene” products.  Can they be sued for discrimination and violating the Civil Rights Act if they don’t also produce “male” hygiene products?

Will male- and female- plugs and tools you find in hardware stores now be considered discriminatory?  Will OB-GYNs now be found discriminatory because they ONLY serve women?

It’s a sad state of affairs that works by Orwell and Ayn rand from more than a half century ago are looking so prophetic.

If DC and the radical left prevail here, I can guarantee that their next target will be the “age of consent.”  There is already a group out there called The North American Man-Boy Love Association (NAMBLA) that favors adult men romancing boys under 18.  In a lot of Latin and Arab cultures, the age of consent is much lower than ours.  *Why should we maintain this ‘age-ism’ when so many enlightened cultures around the world are recognizing the ‘agelessness’ of true love?*

You can laugh and dismiss it all.  But WHO — even five years ago — seriously thought we’d seriously consider legalizing marriage between two guys and doing away with the whole concept of men’s and ladies rooms?

6 thoughts on “Sprinting toward Gomorrah”