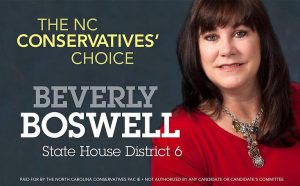 Contrary to popular belief, a pre-election candidate death does not automatically give the election to the surviving candidate.  Chapter 163 of the North Carolina General Statutes spells out the rules for filling vacancies.

We learned this weekend that Warren Judge, the Democrat nominee for NC House district 6, passed away. If he still manages to get more votes than Republican Beverly Boswell, local Democrats can pick a replacement for Judge that would then be appointed to fill the legislative seat in Raleigh.  So, district 6 voters could very well find themselves represented by someone they didn’t get a chance to vote on.

In other words, Beverly Boswell is not home free.  This seat continues to be a great chance to change a liberal voting record to a conservative one.  To accomplish that, it’s important for Ms. Boswell to STILL get more votes than the late Mr. Judge.

3 thoughts on “#ncga: You STILL need to get out and vote for Boswell in HD6”