For a while, I’ve been hearing that state Rep. Justin Burr has been learning a painful lesson: In politics, people will lie to you and stab you in the back. 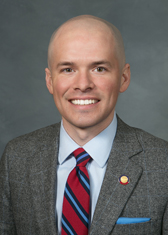 In the Tillis era — Burr was a golden boy with the House leadership.  Thom and his theam walked on water.  And Justin was a good soldier.  Thom left for DC.  Tim and the boys moved in. And young Mr. Burr apparently snapped out of it.  Here’s his reelection announcement released today:

[…] Even with all of these successes of the Republican General Assembly since gaining the majority in the 2010 elections, Burr says there is still more work to be done. During the first four years in the majority, Republicans were effective and efficient in their way of governing; they were able to boast that they were nothing like the gridlock of Washington D.C. or the way Raleigh was governed under the Democrats. Burr, however, believes that since the election of a new House speaker in 2015, that is no longer the case. “Rather than build on the success of former Speaker Thom Tillis, the current Speaker has chosen to return to days reminiscent of the unsuccessful and toxic governing style of former House Speakers Jim Black and Richard Morgan.” Burr said.

Additionally, Burr elaborated that the current Speaker was quick to marginalize the conservatives of the House, and instead align himself with a small group of his personal friends and a number of House Democrats. Instead of making an effort to work together after the leadership elections like former Speaker Tillis did in 2011, the new Speaker decided to resort to the old style of dirty politics that has caused many citizens to lose faith in our government.

Burr stated that he has seen the power structure of the House become consolidated in the hands of four or five members, pushing an agenda that does not align with the Republican’s promises to be efficient and effective with the taxpayers’ dollars. “Under the leadership of the current House Speaker, we have seen the House’s productivity and accomplishments reach an all-time low. Unlike the accomplished 2011-2012 and 2013-2014 sessions, this year was one of the most unproductive sessions in recent history. I believe that poor leadership skills and a move to a top-down approach to control the House, are to blame.”

Ouch.  Someone’s asking for a primary AND — if reelected — a desk in the ladies’ restroom outside the House chamber.  (Good for you, young Mr. Burr.)

The Stanly County legislator itemized a few things he believes back up his claim of failed leadership in the House:

[…]  • In 2015 at least 38 of the 134 days of session had no votes
. • The 2015 session was one of the longest sessions in the past 50 years.
• Two new weeks of vacation were added to the General Assembly’s schedule (One of those weeks was added so that the current Speaker could take a vacation to Europe)
. • The regular long session of 2015 ended on September 30th, compared to June 18th in 2011 and July 26th in 2013.
• In 134 legislative days of 2015 the House cast 1099 votes, compared to 2011, when the House cast 1317 votes in 103 legislative days (which included several special sessions to address vetoes and the redistricting plans).
• In 2015, only 300 pieces of legislation were enacted by the September 30 adjournment – which appears to be a new record low in productivity for the General Assembly. Compared to the 2011 adjournment when nearly 400 pieces of legislation were enacted by June 18, and the 2013 adjournment when 416 pieces of legislation were enacted by July 26.

• The current speaker waited 22 days to appoint the House members to the conference committee to negotiate out the budget differences with the Senate. This lack of action significantly delayed the ability for the General Assembly to finalize the state budget. Burr pointed out that throughout the 2015 session, the Speaker proposed new pork spending and additional corporate welfare. Burr said that he joined with other committed conservatives to form a coalition that ended up successfully blocking millions of the leadership’s irresponsible spending habits in the final budget. “Unfortunately we were not able to stop it all, but we reined them in significantly.” Burr said.

I think it’s safe to label this as the official throwing-down-the-gauntlet in the coming GOP civil war in Raleigh.  A growing faction of conservative House members has come together in opposition to speaker Moore and his lieutenants.  It’s my understanding that — against a credible opponent — Moore’s chances of reelection as speaker are sketchy at best.  That’s without taking into consideration all of the retirements of veteran establishment-type House members that have been rather Moore-friendly.

It is also my understanding that majority leader Mike Hager is rapidly gaining respect as an intra-caucus rival to speaker Moore.

Leadership AND this rebel faction have been running across the state recruiting candidates for the primaries in these open seats.  (They’ve also done some recruiting of primary opponents for current Republican House incumbents.)   With the turbulence in Washington and in the presidential race, this will definitely add to the entertainment of the 2016 campaign.